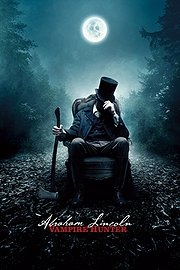 Until Pride and Prejudice and Zombies manages to haul itself, gobbets of brain falling from its gaping maw, out of development hell and onto our screens, Seth Grahame-Smith’s other mash-up novel will have to do. Abraham Lincoln: Vampire Hunter seeks to succeed where Van Helsing and other intense historical horrors failed, but its mix of ridiculous action and less-than-entertaining characterisation go together about as well as garlic-and-holy-water martinis and toothy gentlemen in evening dress. As a child, headstrong young Abraham Lincoln witnesses his father’s villainous employer James Barts (Csokas) bending over his mother in the middle of the night. The next morning she is dead, and Abraham spends the next decade harbouring a terrible desire to revenge himself upon the man who must somehow have killed her. When he is finally grown, Abe (Walker) makes his way back to Barts’ town and shoots him straight through the eye – only to find that Barts becomes a ravening beast with sharp fangs and an unhealthy interest in his attacker’s throat. Lincoln is about to meet a messy end when a mysterious stranger appears and saves him from whatever Barts has become.

Lincoln’s rescuer turns out to be Henry Sturges (Cooper), a refined Englishman – when he isn’t throwing people through barn walls – who explains that Barts is neither human nor alive. He is a vampire; one of many thousands led to the New World by original badman Adam (Sewell) when he saw the limitless feeding opportunities open to bloodsucking slave-owners. Sturges promises to give Lincoln the training he needs to vanquish Barts – but only if he commits to a lifetime as a hunter, forgoing friends and family to kill the targets demanded of him. Lincoln agrees, and under Sturges’ direction becomes a formidable warrior when wielding his woodsman’s axe. But other paths are opening before the young abolitionist – the Union needs a new breed of politicians willing to fight tirelessly for black emancipation, and there’s also the matter of beautiful Mary Todd (Winstead). Can ‘Honest Abe’ combine the demands of a family, a nation and the entire race of men? Oh, Timur. What on earth went wrong? As far as I can see, Abraham Lincoln: Vampire Hunter could have been one of two things – a defiantly serious period fantasy film along the lines of The League of Extraordinary Gentlemen or a high-camp comedy/action/horror romp like the aforementioned Van Helsing. You mustn’t be misled, incidentally, by the fact that both of those films are awful – there was potential for Honest Abe vs. Dracula (a much better title, IMO) to beat either at their own game. Instead, Bekmambetov has tried to cover all the bases and ended up with a film which is neither one thing nor another. The action is absurdly over-the-top but isn’t given context by a similarly upbeat script; the non-slaying bits of the plot are so crushingly solemn that they make every change of tone seem jarring. You can’t keep putting on/taking off your Serious Glasses when you’re already wearing 3D ones.

There are still good points, of course. Benjamin Walker does a fine job in the lead role, playing Lincoln from callow youth right the way through to distinguished elder statesman with only about twelve thousand pounds of makeup to help him in his transformation, and Dominic Cooper is enjoyable if a little underwritten as his pale (HINT) and enigmatic mentor. He has nothing to worry about, however, compared to Mary Elizabeth Wanstead – one gets the impression that Grahame-Smith toyed with writing Mary Todd Lincoln out of history altogether, so reluctant was he to give her anything to do before the last ten minutes. It’s also interesting, if not strictly anyone’s fault, to note the parallels with Bekmambetov’s Wanted – boy loses parent, is taken in by knowledgeable and tooled-up outlaw/s, agrees to postpone his revenge and become an assassin. Even the intensity of the ‘curve the bullet’ scene is replicated when Henry demands that Abraham, hopped up on mythology and survivor guilt, sever a tree trunk with one blow of his axe. If only Abraham Lincoln: Vampire Hunter had a fraction of Wanted‘s sense of fun, its gleeful willingness to revel in its own insanity, it might have been genuinely brilliant. But somewhere in between the twentieth 3D fight scene (at one point a vampire throws a horse at Lincoln. A HORSE.) and the hundredth line of entertainment-free dialogue I just lost interest. Surely making Night Watch and Day Watch should have taught you a little about dichotomies, Timur? Mashing two incompatible elements together doesn’t produce some sort of cinematic Megazord, it just makes for a film with no real audience.

Previous: Streisand gets back behind the camera with Firth and Blanchett
Next: First full trailer for Dredd is SO SLOW