First full trailer for Dredd is SO SLOW 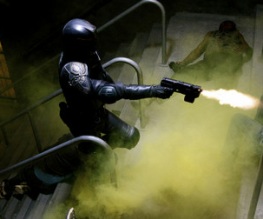 It’s eleven weeks until brand new 2000AD adaptation Dredd hits screens and Karl Urban does his best to erase the last traces of Sylvester Stallone’s behelmeted posturing from our collective memory. And just in time to capture Twitter’s attention before the entire site goes Spider-Man crazy next week, we’ve been given our first full trailer starring Urban as the gnarliest of the Street Judges of Mega-City One and Lena Headey as a drug-pushing criminal mastermind.

There’s action aplenty, appropriately growly lines (“I AM THE LAW”) and a glimpse of the Judges’ trademark handgun, but something’s wrong… did Zack Snyder get in through the piping again?

We know it’s a plot point, okay? We know that Ma-Ma’s drug makes people perceive time at 1% of its normal speed (which makes it sound an awful lot like Brass Eye favourite CAKE). We just hope that pretty much all the slo-mo has been used in that trailer. AND just so we’re sure, is the bulk of the action going to consist of Dredd and friend fighting their way up through a skyscraper to the gang boss at the top? Because we’re pretty sure that’s been done.

What do you think of the trailer? Let us knoooooooow belooooooooooow…