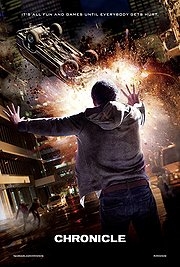 2012 is undoubtedly going to be the year of the superhero, and with The Avengers, The Dark Knight Rises and The Amazing Spider-Man all in our sights there’s plenty of competition for bantamweight contender Chronicle. First-time director, unknown actors and a script by – hang on, by John Landis’ son? Wow, that’s cool. Turning the tired old tropes of found footage cinema on their head and effortlessly hurdling the minefield of with-great-power bullshit which normally accompanies teenagers suddenly becoming nuclear-powered, Chronicle has set 2012’s superhero bar pretty bloody high. What do you do when you’re bullied at school, harassed by your alcoholic father and consumed with concern for your cancer-ridden mother? If you’re teenage introvert Andrew (DeHaan), you buy a crappy video camera and start to document your life – things seem less real through a lens, after all. Andrew doesn’t have much social standing to lose, but becoming ‘the freak with the camera’ does a good job of shifting whatever credibility he did have; the only person willing to spend any time with him is his handsome and intellectual cousin Matt (Russell). In an attempt to make him loosen up Matt takes Andrew to a rave at an abandoned farm, where he and prospective class president Steve (Jordan) find a mysterious hole in the woods. Andrew is persuaded to climb down the hole with his camera to document the strange glowing crystal inside. The boys touch it – and black out.

Three weeks later, Andrew’s still filming – but he, Matt and Steve are now inseparable pals. What’s changed? Oh, it’s the oldest of old chestnuts – at some point between their underground adventure and the resumption of the film, the three boys began to manifest telekinetic powers. Soon they harness their abilities to make themselves physically invulnerable and (after a few mishaps) to fly; all carefully documented by Andrew, who turns out to be the most powerful of the lot. However, when Andrew playfully swats at a car that’s tailgating him and sends it careering into a lake, Matt realises that rules have to be imposed on their growing powers. That’s fine by him and Steve, but Andrew can’t give up the feeling that he’s finally different and special. Why should he be afraid of bullies or his drunk dad now? He’s rocketed straight to the top of the food chain – and he means to stay there… Everything about Chronicle suggests that it should be awful; the director and lead cast are all outrageously inexperienced, the premise has already had several outings (in various media) over the past few years and everybody’s totally sick of found footage films. Yet for some reason, this combination of sulky teens and intangible CGI works an absolute treat. Max Landis’ snappy, unaffected script is genuinely believable as the unscripted dialogue we’re ideally supposed to imagine it is, largely devoid of polished wit and portentous speeches in favour of genuine, frequently awkward exchanges between some very confused and frightened young men. The camerawork is equally inventive, Andrew’s ability to levitate his digicam making for some very interesting angles and a much-reduced reliance on the one-character-talking-from-behind-the-camera model to which audiences are now painfully accustomed.

The use of CGI is sparing and refreshingly atypical, with the boys’ flight scenes particularly notable for the relatively realistic way in which they show flight as a side-effect of telekinetically manipulating matter – in this case, the flyer himself – rather than just another inexplicable power. Much of this is down to the three stars, who all approach the unusual challenges of their roles with gusto and innovation. DeHaan is particularly memorable as the loner who begins to convince himself that he’s an “apex predator”, whilst Russell and Jordan are just as convincing with their more conventional (and commensurately sidelined) characters. A fine supporting performance from Michael Kelly as Andrew’s disturbed and disturbing father gives the central story context and an almost uncomfortable urgency. The third act may be a little wobbly and dependent on long-shot fight scenes, but its two final scenes – one visceral and thrilling, the other drawing together the disparate threads of the plot in a thoughtful and serene ending – make up for the slightly overdone smashing about and zooming through an animated Seattle. It’s all forgivable, actually, because by the standards of young adult sci-fi this is a work of art. Even the ever-present CCTV cameras and iPhone gawkers, perpetually on hand to catch every shot which Andrew doesn’t film himself, have something catty and clever to say about our surveillance society – just another unexpected bonus in a film which is anything but braindead. Hey, I Am Number Four? This is how you’re supposed to do it.

Previous: The 7500 trailer manages to give absolutely nothing away
Next: The Well-Digger’s Daughter