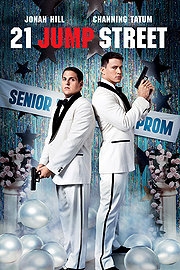 We’re well aware that 21 Jump Street has absolutely no business being good. Directed by two people who have never taken on action before – Phil Lord and Christopher Miller of Cloudy With A Chance of Meatballs fame – and presumably created purely out of a desire to cash in on the popularity of the 80s drama series of the same name, at the very most it should have been a passable, smirk-worthy jaunt along the lines of Sherlock Holmes. But with more naked high school chicks and jokes about bongs. Two sub-standard police officers sent back to high school to bust a drug-ring, one’s nerdy, one’s a jock – the heart-warming, crotch-loosening lessons practically write themselves, right? But it turns out that this cliche-crushing adventure-romp has far more in common with Hot Fuzz than it does with Never Been Kissed, pitting the tired conventions of both the buddy cop and teen-comedy genres against each-other to create something genuinely refreshing. So it turns out being bad-ass policemen isn’t quite as bad-ass as Schmidt (Hill) and Jenko (Tatum) dreamt it would be. Though the two were polar opposites in high school – NERD/JOCK, blah blah, we’ve all seen She’s All That – whilst training they discover the winning combination of Schmidt’s brains and Jenko’s brawn, and vow to become partners. The trouble is, the combination isn’t nearly as winning as they’d hoped. After completely ballsing up their first arrest by failing to read the criminal his Miranda rights, the two are lambasted by their chief (damn those lambasting chiefs) and told that they’re being put onto a different project. A project, we’re told, that started in the 80s, was then abandoned, but now is being re-visited because no-one involved can be bothered with coming up with new ideas. Hang on, was that.. was that a bit of self-reference? Cheeky beggars. So yes, the two will be sent back to school in order to bust a dangerous drug ring, taking on new identities as brothers. The hunk-tacular Jenko couldn’t be more confident; if there’s one thing he knows, it’s how to survive schools in the Yoo Es A. Walking up with the clammily worried Schmidt on their first day he points at the various groups and solidifies the stereotypes we all know so well. “They’re goths…”, he whispers, “they’re nerds, they’re…” – he stops in front of some hipsters – “I…I have no idea what they are.” It’s here that 21 Jump Street reveals the first of its many trump cards – bringing the teen comedy bang up to date, with the popular kids a lot more interested in climate change, anti-fascist movements and getting into a good university than they are picking on the dweeby kid. It seems that Jenko’s time has been and gone – his beefy physique gets him little more than a crush in the shape of his (brilliantly mental) chemistry teacher -and it might just be that the studious, caustic and self-deprecating Schmidt has a lot more in common with the geek-chic rulers of teens in 2012. But as it becomes clear that the solution to the drugs-riddle lies with the most popular kid of all, will Schmidt be able to resist the draw of being liked in order to do his job? And will Jenko’s unlikely new posse – the rather anaemic chemistry crew – ever be able to teach him what a covalent bond is? The thing about 21 Jump Street is that there simply isn’t a weak link to it. The script is fizzy, confident, arch and fun, never taking its story or its characters too seriously but still ensuring that the plot is briskly woven enough to keep us interested. The numerous chase sequences are well-shot and pacy – with a repeated joke about how nothing seems to explode the way it does in the movies done to perfection. Even the (obligatory) love interest, coming in the delightful form of Greenberg‘s Brie Larsson, feels relevent and fresh, proving conclusively that Emma Stone isn’t the only girl in Hollywood built to steal our hearts via the means of genuine comic likeability rather than foxy limbs. Channing Tatum is almost unrecognisable as Jenko; his wit, timing and commitment to the physical set-pieces making him a genuine joy to watch – it turns out you don’t know real happiness until you’ve seen him leap enthusiastically through a gong whilst tripping his face off. At the end of the day, it just looks like such damn good fun. Foul-mouthed, violent, always one step ahead of the trope it indulges in and with a couple of cameos that cannot fail to delight (Ice Cube as their perpetually furious head of department is a piece of casting genius), 21 Jump Street is that rarest of rare things – a revamp that does its origins proud. In choosing to steer the 80s drama vehicle down the road of comedy, this team have transformed what could have been a lack-lustre trip down Teen Cliche Lane into an engaging, self-aware celebration of our continued love of the buddy genre. Easy A meets Starsky and Hutch, only with a really, really bloody good Channing Tatum, it’s difficult to imagine anyone walking away from Jump Street without a spring in their step.