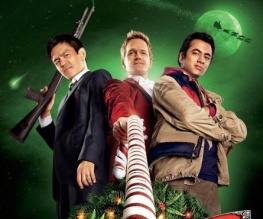 My mother always used to say, “Don’t be fooled by appearances. The Harold & Kumar films actually have a lot to say about society.” Her words never made much sense at the time, but looking back now, I heartily agree with her. The only real problem with this third outing in the series is that perhaps it has a little too much Christmas spirit for its own good. Sure enough, though, Harold and Kumar are brought back together on Christmas Eve via the appearance of a giant, mystical joint. Chaos ensues when a fire starts in a Christmas tree belonging to Maria’s terrifying father (Danny Trejo, obviously) and Harold and Kumar must go out into the wide world to find a replacement fir. Along the way, they collide with Neil Patrick Harris (on glorious form, as always), accidentally get Todd’s baby high (hilarious acting by the baby in question) and have a close shave with some Russian gangsters. It’s all ridiculous, obviously, but it’s good fun and very warm-hearted. In fact, the predictable rekindling of Harold and Kumar’s friendship is almost too warm-hearted, and a little lacking in the edginess of the previous films. Part of what is so good about the Harold & Kumar series is that it’s secretly very intelligent. On the surface, the films are your typical gross-out fare, but at their core – in the same vein as South Park – they’re biting satires that comment on race, religion and politics (particularly the case in the second film, the provocatively titled Harold & Kumar Escape From Guantanamo).

The third film, though, seems to have lost a little of that delightful oomph. Yes, there is a baby getting high on Class A drugs; yes, there is a penis getting stuck to a frozen pole; yes, there are nuns showering together naked. But none of it quite keeps up with the previous film’s courageously tactless form. A Very Harold & Kumar 3D Christmas also lacks the first film’s elegant simplicity, in which the duo were driven simply by their desire for White Castle hamburgers. That’s not to say that there aren’t a lot of funny moments in this film. From the off, one of the major targets for fun-poking is Hollywood’s current obsession: 3D. In a scene near the beginning, one of Harold’s office underlings is pelted with eggs (flying slo-mo towards the screen) by a group of Wall Street protestors, Willem Dafoe from Platoon-style. There’s also a very funny sequence where Harold and Kumar hallucinate that they’re “claymated”. And, at the end of the day, John Cho and Kal Penn make such a charming onscreen pairing that I’d be quite happy to watch them reading out the entire script of Breaking Dawn.

Despite setting out to satirise the conventions of the holiday season, though, A Very Harold & Kumar 3D Christmas ends up being rather on the sweet side. Indeed, this film resembles less a White Castle hamburger than a warming, sugary mince pie. Perhaps a mince pie dusted with cocaine, but a mince pie nonetheless. The thing is, it is Christmas. And what more could you want at this time of year?

Previous: Battleship continues to look like the Worst Film Ever
Next: BFF Advent Calendar – 12th of December