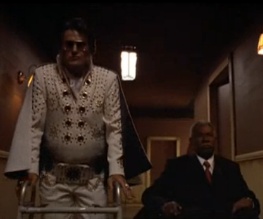 If the world was fair and righteous (note to the naïve: it’s not), Bubba Ho-Tep would be one of the most successful films of the last ten years. The premise alone deserves it – a plot so joyously demented and inventive it can’t help but provide you with a “WTF?” moment. Prepare yourself. It goes thusly: An ageing Elvis “impersonator” (Bruce Campbell) and a wheelchair-bound black guy who thinks he’s JFK (Ossie Davis) battle an anally-obsessed cowboy mummy in a retirement home.

Even though this sounds like the kind of idea David Lynch might dismiss as “a little bit out there”, you’d be surprised how sane and grounded the whole film is. The tone is one of deadpan sincerity; self-conscious wackiness and knowing winks to the audience have no place here. This is in no small part due to Campbell’s career-defining portrayal of Elvis. His foul-mouthed, frustrated and mournful performance is both a testament to his skills as an actor and a pitch-perfect tribute to the King. The much-missed Davis’s JFK is equally remarkable, delicately balancing befuddled insanity and righteous anger with a superbly comic lightness of touch. That’s not easy with lines such as “The FBI took a piece of my brain… I got a little bag of sand up there now!” but Davis pulls it off with aplomb.

And although it’s wickedly funny, there’s a great big emotional heart beating square in the centre of Bubba. It’s a quiet rumination on the tragedies of getting old and the nature of true heroism, a hymn to power and purpose regained. It’s been rumbling along since its initial release as an underground cult classic, but that’s no reason to be put off. Once seen, we personally guarantee you’ll love it forever. Get in on the action. Hail to the King, baby.

Previous: I run a couple of newspapers… What do you do?
Next: Peep Show: Seasons 1-6