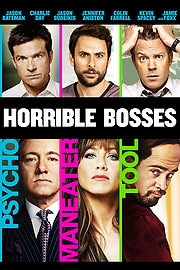 It’s always nice to see proper chemistry between actors in a Hollywood comedy, and Horrible Bosses has it in abundance. It doesn’t have much else, is the only thing. A stellar cast allowed to run amock in a variety of increasingly Kenan And Kel-esque scenarios; when it works, it really does work. It’s just that without anything else on offer, it all gets rather wearying fairly quickly.

So. For those of you who haven’t seen Strangers On A Train, Swimming With Sharks and didn’t sit glassy-eyed in front of Nickelodeon as a child, here’s the situation: three t-shirt wearing everymen (Jason Bateman, Jason Sudeikis, Charlie Day) hate their ridiculously caricatured bosses (Kevin Spacey, Colin Farrell and Jennifer Aniston respectively). They decide to kill them. They say the words “no no no we won’t do that”, to make it seem like it’s real life. And then they decide to kill them. It’s a simple enough premise, and one with a lot of breathing room for improvisation and silly set pieces – room which is thoroughly taken advantage of by everyone on-screen. For the Bosses, this film is a dream: Kevin Spacey spends the entire time pushing his increasingly doughy skin into a variety of hard-edged suits and glimmering with that good ol’ Kevin Spacey intensity, Colin Farrell gleefully insists on a comb-over, nunchucks and lady-boy night-companions, and Jennifer Aniston finally gets to say the word “fuck” without bursting into tears afterwards. All are, it has to be said, rather perfectly cast, but you never quite shake the feeling that you’re just watching three beloved actors having a really nice time at a costume party. The script isn’t strong enough to push you beyond bemusement, and you can’t help but feel that if we hadn’t sat through seventeen films where Jennifer Aniston plays Jane “Some Hair” McBland, we wouldn’t be nearly as delighted. It’s a strange little issue that also crops up in the scenes between our three hapless young murder-planners. All three are strong improvisers, and the dialogue (if it can be called that) is slick and well-judged, particularly on the part of Sudeikis and Bateman. Charlie Day unfortunately mistakes “getting louder” for “being funnier” but it wouldn’t be an American gross-out without one of those types, right? But again, it’s evident from the beginning that rather than actual, proper scenes, what we’re watching are increasingly silly scenarios in which the three lads just play ‘who can make the other two laugh’. What we’re witness to is the only take where no-one cracked up. From breaking into Colin Farrell’s coke-den, to staking out Aniston’s slut den, to fleeing Spacey’s Spacey den cos the cat keeps jumping out at them (hilariously), the meandering dialogue and pointless asides make the entirety of Horrible Bosses feels like a playground for the cast rather than a story for the audience. That isn’t to say it isn’t amusing – if anything, that’s all it is – but Seth Gordon’s film certainly never delivers the ultimate satisfaction (not just emotionally, but narratively) of an Apatow or even a Todd Phillips shebang.

All in all, if you’re happy to watch a group of talented actors have a smashing time in lots of different rooms, then by all means, go watch Horrible Bosses. It’s good fun, it really is. But if you want to watch an actual, proper film, maybe don’t bother.