Just Go With It 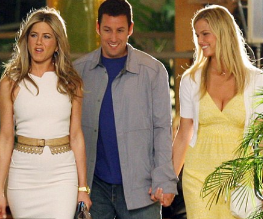 There’s a moment, fairly early on in Just Go With It, where everything could have been different. Not just for us, not just for Adam Sandler’s Happy Madison Productions, but for humanity as a whole. After spending the evening hobbling down a moonlit beach with an impossibly beautiful young (YOUNG) thing, Adam Sandler asks the enchantingly golden maiden, “are you an actress?” In response, the girl simply smiles and says “Yes, yes I am. And let me tell you, never in the history of the sacred craft has anyone had to work harder than I am now trying to find you anything other than physically repugnant. Go and have a big sleep, Adam Sandler, not only because you evidently need the physical respite but because from now on, it’s only in your dreams that visions such as myself will gaze into your eyes instead of sinking stillettos into the wrinkled folds of your back.” Except of course she doesn’t say that. What she actually says is “No, silly, I teach sixth grade math”. Liar. LIAR.

Adam Sandler’s character (lets call him “Wanker”, for clarity’s sake) only ever shags hot young chicks he can fool into thinking he’s married (bless him), because as we all know, hot women just BLOODY LOVE shagging married men, especially when the man is twenty years older than them, and looks like a slowing decomposing egg. One day Wanker meets a really, really hot chick (math girl) and decides that he probably wants to marry her, because that might add depth to a plot that otherwise revolves around a man lying to women and then shagging them. But UH OH! She thinks he’s married already! D’OH! Luckily, his assistant Jennifer Aniston (actual character name, probably) is sad, divorced, has some kids and agrees to pose as his soon to be ex-wife. And there’s no way he’ll ever fall in love with her, because that’s not what happens to every character ever played by Jennifer Aniston. Also, she’s wearing glasses. Troll. Through some utterly horribly scripting they ALL END UP GOING TO HAWAII TOGETHER ON A BIG HOLIDAY HAHAHA! Why? Because everyone knows that if a script is looking ropier than a nautical tug of war, its probably best to introduce a scenario where the female characters wear bikinis. More inexplicable than anything else (including a scene where, out of nowhere, a man donning a fake german accent gives CPR to a sheep) is the fact that both Jennifer Aniston and Nicole Kidman agreed to be part of a film so utterly, utterly degrading. At one point, when the two of them are inexplicably competing against one another in a hula dancing competition (the fatties and oldies are voted off fairly quickly – whew) we just have to sit and watch Adam Sandler, in a chair, feasting his eyes on them dancing. Yeah. Oh yeah. That’s right. Move those hips, writhe, dance, dance for Adam Sandler. Do you want to dance, Adam? Will you take off you massive T-shirt and dance for us? No? No, I didn’t think so. The overriding point to Just Go With It is, at least, a fairly simple one: everyone falls in love with Adam Sandler, no matter how astonishingly unlikable he is. And, if you’re lucky enough to have the best body in the entire world (oh, it turns out Jennifer Aniston does, after all), then he might shag you, and then treat you to one of his many, brilliant jokes. One is about his hand being a dog. I hate you, Adam Sandler. I cling to a single, tiny flash of hope; that whilst filming one, just one, of the several thousand “he’s been hit in the crotch!” jokes that fill the gaping abyss of Just Go With It, something a lot sharper than an adolescent vagina actually found its mark.

Previous: Black Movie Festival, Geneva: A brief introduction
Next: Short Film of the Week: The Terrible Thing of Alpha 9