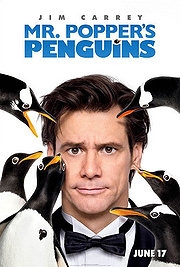 Jim Carrey made Liar Liar in 1997. He went on to make The Truman Show, Eternal Sunshine Of the Spotless Mind, I Love You Philip Morris and various other films that meant he didn’t really have to make films like Liar Liar anymore. Now, it’s not that Liar Liar was necessarily a stain on his reputation – it’s just that at that point, he didn’t really have a reputation to stain. He does now. YOU DO NOW, JIM. STOP LAUGHING AT THAT PENGUIN HAVING A POO AND LISTEN TO US – YOU DO NOW.

So, in a plot built entirely around the desire to showcase lots of shots of Jim Carrey being followed around by some penguins, Jim Carrey wakes one day to find he’s suddenly got a penguin. Everyone goes “YES! ONE OF THE PENGUINS” and then gets a bit impatient, because one penguin is alright and everything, but it’s hardly enough to build a respectable film around. Fortunately though, five more penguins get delivered quicker than you can say “I don’t want any more penguins delivered”, and suddenly, JIM CARREY HAS LOADS OF PENGUINS. Cue the slow destruction of his home, his estranged kids doing some good bonding with him and his frowny mouth bosses checking their penguin-skin ties and saying words like “Popper, are these PENGUINS?” to which Jim Carrey’s cave-eyes get bigger than his cheeks and he says “YES THEY ARE PENGUINS” with a glee unmatched by any human emotion ever recorded. To be fair, as a mindless kids flick it all works just fine – there’s a bad zoo keeper determined to round up the gawky critters, the transformation of a Boring Grownup Apartment into a MAGICAL PENGUIN WONDERLAND, a gleamy-faced young boy and the obligatory moody teenage girl, but by God if we haven’t seen everything, everything, a thousand times before. Putting a penguin in the background of the scene Where Jim Carrey Realises He’s Throwing Everything That Really Matters Away For The Career He Thought He Wanted doesn’t make it a different scene. It makes it the same scene, but the budget that could have gone on changing the dialogue has instead gone on a CGI penguin. Yes his trademark gurning is out in full force, but trapped within the constraints of a desperately stale character arc it just feels like he’s doing a half-hearted impression of himself back when he was funny. And that’s a sentence I really, really never wanted to write. Of course, your kids won’t know any of this, so the tragedy will be all your own – but why waste hard earned cash on the collapsing rolls of Jim Carrey’s face when you can shove them in front of The Mask and let them witness a comedy great in all his elastic glory?

So, as you might guess, it all works out alright for Mr Popper. He gets his penguins, his kids don’t think he’s a cretin anymore and he learns a magical lesson about the kind of things films like this teach us lessons about. As a harmless family film, you could probably do worse. There’s no trepidation to be felt about taking the kids to see Mr Popper, it’s the grownups they’re taking to see Mr Carrey that I’m worried about.

Previous: The Salt of Life
Next: Bridget Jones threequel is go 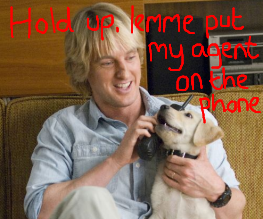