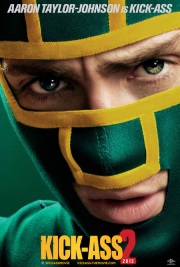 Following the events of the first film, which saw highschooler Dave Lizewski (Aaron Taylor-Johnson) don a wetsuit to become the world’s first superhero, he’s inspired a revolution – concerned citizens across the world are sewing costumes, thinking up stupid names and taking to the streets to generally kick crime’s ass. But while Dave/Kick-Ass is happy to be a part of something bigger than himself, his actions have had unexpected repercussions. Hit Girl, the pint-sized vigilante who teamed up with Kick-Ass along with her daddy, er, Big Daddy (Nic Cage), is now living with a guardian following Big Daddy’s death – and he’s made her promise to abandon her alter ego and return to life as Mindy Macready, the teenage girl she doesn’t even recognise in the mirror.

Meanwhile, Chris d’Amico/Red Mist (Christopher Mintz-Plasse) hasn’t reacted well to his former super-colleague Kick-Ass blowing up his crime lord father with a bazooka – taking full advantage of his new fortune and his mum’s bondage gear, he reinvents himself as supervillain ‘The Motherfucker’ and begins to gather an army of bad guys. Kick-Ass is going to need a superhero team of his own – but without Mindy, what chance does he stand?

So far, so identikit superhero film. Protagonist can’t reveal his identity and yearns for companionship and support, antagonist is driven mad by trauma and plans elaborate revenge on the unwitting protagonist, principal female has to choose between her secret life and becoming a Mean Girl. Blah blah blah. I’d love to tell you that this is all turned on its head by a sudden twist of the sort that littered Kick-Ass, but the truth is there’s nothing new here at all. Aaron Taylor-Johnson continues to be far too old to play a teenager and far too shallow to do anything else, whilst the entire supporting cast is one-dimensional and entirely without sticking power. It’s a bloody good job they’ve all got ridiculous names – Night Bitch, Genghis Carnage, Mother Russia – and stupid gimmicks, because there’s no other way you’ll remember who’s who.

As you might expect, the closest thing this film has to a saving grace is Chloë Grace Moretz’ Mindy Macready. Flitting effortlessly between awkward teenage girl and masked warrior for justice, she is equally compelling whether she’s stabbing someone with a broken bottle or nervously embarking on her first date. The trouble is, there’s not enough for her to do – the Kick-Ass franchise was never going to top her spectacular opening scene in the last film – and it’s impossible to ignore how much better she is than literally everyone else. If they’re not bad, they’re boring – one suspects Jim Carrey’s loud protestations about the film’s violence were just to make sure people noticed he was in it – and if they’re not boring, it’s only because they’re being horribly brutal for the sake of it. I’m all for gratuitous gore and dark humour, but there’s shooting someone with a bazooka and then there’s comedy rape scenes. Grow up, Wadlow.

If Kick-Ass 2 had come out as a stand-alone film, it would have been nearly (but not quite) alright – the sad truth is that it’s so much in Kick-Ass‘ shadow that it’s even hard to enjoy the half-decent bits. So here’s my suggestion: go and get DVD of the original down, watch that and just try to pretend that Kick-Ass 2 doesn’t exist. It’s not that it’s terrible, but for a film that promised so much it’s arguably worse to be mediocre. Kick-Meh.