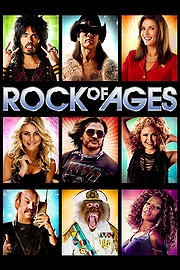 In Rock of Ages, the popular jukebox musical stage show, the female lead shags rock star Stacee Jaxx halfway through the first act because she vaguely thinks she’s been snubbed by her boyfriend. A while later, the sometime couple are nearly parted forever – but then the narrator reveals to them that they’re just characters in a musical and can thereby reject the pursuit of fame and find their own path to happiness. Oh, and then Stacee has to flee to Uruguay because he’s committed statutory rape. If even one of these things had happened in Rock of Ages, the not-even-as-popular-as-Madagascar–4 jukebox musical film, then I might have been happy; instead, we got Russell Brand kissing a bewigged Alec Baldwin. Sigh. Wannabe singer Sherrie (Hough) has bought a one-way ticket to the bright lights of Hollywood to fulfil her dream of stepping into the spotlight; but all seems lost when her bag’s snatched within minutes of her arrival. Fortunately, she bumps into Drew (Boneta), another aspiring musician who pays the bills by working at famous venue The Bourbon Room. Drew persuades his irascible boss, fading rocker Dennis Dupree (Baldwin), to take Sherrie on, and in return she encourages her new squeeze’s musical ambitions. Meanwhile, Dupree and his right-hand man Lonny Barnett (Brand) are relying on one more triumphant gig to save the Bourbon from repossession by the tax man – legendary star Stacee Jaxx (Cruise) is leaving his band Arsenal, and he’s returning to the club where he played his first gig to launch his solo career.

Whiskey-soaked and accompanied by a baboon, Stacee shows up and, after seducing a journalist (Malin Åkerman) to get himself in the mood, plays a great show. HOWEVER, his performance affects more things than the journalist’s future sexual expectations – Stacee’s unscrupulous manager Paul (Paul Giamatti) welshes on his deal with Dennis and takes every penny of the night’s takings, while Drew (on a high from supporting Arsenal in front of a huge, sweaty crowd of greasers) thinks he saw evidence of Sherrie and Stacee getting it on. Angry and arrogant, he accepts a record deal from Paul and leaves the Bourbon Room behind. Whatever will Sherrie do now? What about Dennis? And how have we not even got round to mentioning the new mayor (Bryan Cranston) and his suspiciously evangelistic anti-rock’n’roll wife (Catherine Zeta-Jones) yet? We promise you won’t care, you’ll just want to see some more of Stacee and then go home. When I told Tash that Rock of Ages was distinctly mediocre, I thought she was going to cry. “But HOW?”, her poor damp eyes seemed to ask. “This could literally have been the best 80s jukebox musical film of all time!” And so it could. After all, the Broadway show on which it is (loosely) based has met with critical and commercial success ever since it launched in 2006 – surely it’d be impossible to cock up such a winning formula too much? Turns out it’s quite easy; all you need to do is try to turn a comic musical into an anodyne love story starring two nobodies, plus some of the biggest names in Hollywood whoring their reputations with ten minute cameos and stupid hairpieces. Rock of Ages will go down a treat with the tiny proportion of Gleeks old enough to know any of the songs, although even that’s harder than you might think – every guaranteed air-puncher from Twisted Sister or Def Leppard is offset with two or three soft rock tracks you’ve never heard of.

To be fair to the ‘real’ actors in the cast, they all seem to be having a jolly nice time. Alec Baldwin was made to have long hair and deliver extraordinarily bad lines like “I’m busy. Busy FALLING IN LOVE” straight after kissing Russell Brand (whose accent has morphed from generic Essex to generic Midlands, with rather wobbly results), and Paul Giamatti still does unctuous bad guys like nobody living. It was nice to see Catherine Z-J high-kicking again so long after Chicago, but she’s riotously underused and gets some of the dullest numbers going. Nothing’s quite so boring, however, as the central love story. Julianne Hough (of Dancing with the Stars fame, apparently) and Diego Boneta, who might as well have been found in a bin outside the set for all he seems to have done before this, are wooden, predictable and not even particularly good singers – at least the seasoned actors have half a chance of surviving the unforgivable script. I never really thought I’d write these words again, but the best thing about this film by absolutely miles is Tom Cruise. Stacee Jaxx is a superb rendering of the neurotic, ‘spiritual’, detached-from-reality rockstar, and Cruise’s portrayal is as funny as it is incisive. You will feel for Stacee, you will mouth the words to his (surprisingly well-delivered) songs, and you will fancy him more than a little bit. It would almost be more satisfying if he’d been as crap as virtually everything else – as it is, Cruise’s intelligent, emotive, pitch-perfect performance couldn’t be more out of place in this dopey, stilted and distinctly off-key film.