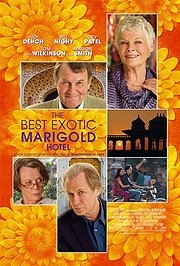 The occasional aberration aside, as a nation we really are very good at gentle romantic comedies – and in this age of austerity, what could be more sensible than taking all the best bits of the last decade’s worth and stitching them together into a shiny new film with a newly multicultural flavour? Here’s how it works: take the best bit of Love Actually, the lead cast of Ladies in Lavender, the supporting cast of Calendar Girls, a chap from The Full Monty and the director of Shakespeare in Love, then add the star of Slumdog Millionaire and garnish with nostalgia and cumin. Sorted.

Gosh, it’s rubbish being old – particularly if you’re old and a National Treasure, then there’s no way you’ll make it through the next two hours without hijinks of some sort occurring. Evelyn (Dench) is a new widow trying to deal with her husband’s debts and her ISP’s Indian call centre, Douglas and Jean (Nighy/Penelope Wilton) are struggling to buy a retirement home after investing in their daughter’s abortive startup, jaded judge Graham (Wilkinson) wants to return to his roots and wheelchair-bound racist Muriel (Smith) needs a new hip. And that’s before we even get onto the topic of put-upon grandma Madge (Celia Imrie) and wannabe lothario Norman (Ronald Pickup). Things look bleak in England, but fortunately (for the plot) all seven despairing golden-agers come across leaflets for the Best Exotic Marigold Hotel in Jaipur – a place, according to its blurb, for the “elderly and beautiful”.

Hopeful of a relaxing and cheap retirement in India, all seven retirees make their way to the subcontinent and, eventually, to Jaipur. They are met by dust, cockroaches and enthusiastic (if inexperienced) manager Sonny (Patel), whose father ran the hotel into the ground years ago. Sonny has just about got the freshly renamed Best Exotic Marigold Hotel back on its feet, but he needs a major investment to finish refurbishing – and his mother is keen for him to return to Delhi and abandon his madcap project, as well as his unsuitable girlfriend Sunaina (Tena Desae). Nevertheless, with a couple of exceptions the expats settle into Jaipur and begin to adapt to the new pace of life. They all have their own aims, from the lofty – Graham wants to find his lost love, uncontacted since his teenage years in India – to the prurient – Norman really, really wants to get his end away. Will it all turn out alright in the end? Once someone’s died and someone else has had a revelation, obviously… It’s so hard not to love this sort of film, so why fight the power? The Best Exotic Marigold Hotel is utterly, utterly charming throughout, from the opening scenes (Judi Dench facing down an intractable call centre worker, a skill which comes in handy later on) to the final act in which, obviously, every single loose end is deftly wrapped up into some sort of woven bundle of middle-class satisfaction. It’s a bit too neat, obviously – Graham’s quest for love lost carries on in the background for most of the film and is then painlessly resolved within minutes of the audience being clued in, and the last twenty minutes is miraculous wish-fulfilment on a par with the end of The Secret Garden or Disney’s Robin Hood. “And then King Richard came back, and he and Maggie Smith sorted everything out.”

Saccharine post-credits-sequence-worthy ending aside, it’s worth remembering that nobody is really here for the overarching story. The interweaving plots of The Best Exotic Marigold Hotel are just as deftly handled as in Love Actually, and the cast is equally enjoyable (if slightly less toned). Just as he was in Richard Curtis’ paean to upper-middle-class families in snowy London, Bill Nighy is far and away the best thing about this film, exuding slightly brittle composure and finely wrought one-liners like Noel Coward in need of a haircut. Dev Patel, who is from Harrow, is very convincingly Indian, and Tom Wilkinson and Ronald Pickup should both receive a public recognition boost off the back of their distinct but equally engaging performances. I refuse to compliment Judi Dench because she’s already officially everyone’s favourite actress (but she was very very good, so that’s okay). And India is, as usual, its extraordinary self – I honestly don’t think any film set there could fail to benefit from the sheer life and colour which spills out of every shot. I was very happy to praise The Debt, John Madden’s tense and thrilling last film (in which Tom Wilkinson was nearly as good as he is here), but with The Best Exotic Marigold Hotel he has really returned to his home ground. The man directed Mrs Brown, for God’s sake – why would we ever let him make anything but engaging Judi Dench-based romances ever again? Gentle, eager to please and ever so slightly behind the times, this is a film as lovable as its universally-adored stars.

Previous: Midnight in Paris and The Descendants triumph at WGA Awards
Next: New poster for Eddie Murphy’s dreadful new film