The Kids Are All Right 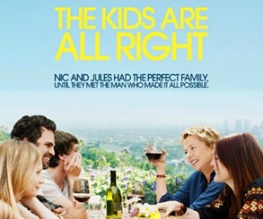 Well, no longer. Although it isn’t quite as groundbreaking as it would like to be, The Kids Are All Right deserves to make a memorable impact for its no-holds-barred exposure of a lesbian couple who are – *gasp!* – just that. A normal couple with normal kids, leading a typically hectic and frequently frustrating shared life. What do you mean, you thought there’d be baby oil?

Joni (Mia Wasikowska) and Laser (Josh Hutcherson) are pretty average kids – Joni’s about to head off to college, and Laser’s preoccupied with skateboards and nondescript pills. The only difference between them and the rest of their street? Their parents are both women. Overachieving doctor Nic (Bening) and laid-back gardener Jules (Moore) each conceived a child with the help of an anonymous sperm donor, and for more than twenty years have been living a life of quiet domestic bliss in an LA suburb. Unfortunately, all that is about to change when Joni turns eighteen and, at her younger brother’s urging, discovers the identity of their biological father. Said donor is Paul (Ruffalo), a college drop-out turned organic farmer and part-time biker, whose easygoing attitude makes quite a change from Nic and Jules’ overprotectiveness and immediately entrances ‘his’ kids.

Nic is decidedly hurt that Joni and Laser wanted anything to do with the man she regards as an unfortunate genetic necessity, but when Paul becomes the first client of Jules’ landscape gardening business a friendship flowers between them – much to the dismay of Nic, who begins to rely on her ubiquitous glass of red as the rest of her family inches towards the man who seems to think he’s acquired a pre-grown family. As the date of Joni’s departure to university draws near, it’s anyone’s guess what shape this unconventional household will have contorted itself into by the time she leaves… The Kids Are All Right is that rare beast, a fusion of drama and comedy in which neither gets the upper hand. The first half of the film is decidedly upbeat, with sparkling dialogue flashing between the believably Everymannish characters, but as as things take a darker turn the tone shades carefully out of rom-com territory without a noticeable lurch. Bening and Moore (who have an impressive seven Oscar nominations between them) are on superb form as the couple struggling to do what’s best for their children in the face of overwhelming personal problems, and Mark Ruffalo’s quest to erase our collective memory of his entire pre-2006 filmography continues apace with another well-observed and believable performance as the smug ladies’ man who suddenly discovers he’s a father of two. Mia Wasikowska’s Joni is restless and desperate to spread her wings, whilst Josh Hutcherson is enjoyably fragile as “sensitive jock” Laser.

It’s not a perfect film – the ending is depressingly saccharine, and Cholodenko’s agenda could have been better served by avoiding clichéd ‘lipstick lesbian’ and ‘man-hating dyke’ roles for the main characters, but the wonderful thing about The Kids Are All Right is that its portrayal of lesbianism isn’t the be-all and end-all of the film. For once, the plot is not exclusively about homosexuality – it’s an intelligent, well-written story about a conflicted family which happens to have two mums. Even if it wasn’t such an enjoyable watch, this fact alone would make it worthwhile.

The Kids Are All Right is out on the 29th October.

Previous: Across The Street, Around The World Festival: Best of the West
Next: Lead found for Life Of Pi 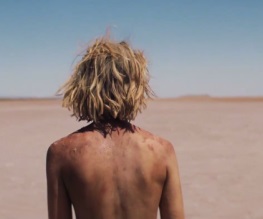