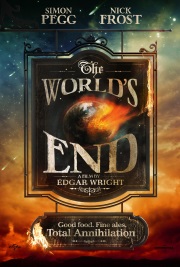 So, this is how it ends – if not the world, then at least Edgar Wright, Simon Pegg and Nick Frost’s crowd pleasing ‘Three Flavours Cornetto’ trilogy. Directed by Wright, co-written by him and Pegg, and starring Pegg alongside Frost, what began nine years ago with zombie-fuelled comedy Shaun of the Dead and continued with 2007’s small town police caper Hot Fuzz concludes here, with a pub crawl unlike any other. Never before has the phrase ‘last orders’ been quite so literal.

Yet whilst fans have awaited this moment for the past six years, their longing remains slight compared to that of the film’s protagonist, Gary King (Pegg). Having drifted listlessly through adult life, Gary’s fondest memory is the day he finished high school; the day he and his friends tried – and failed – to defeat the ‘Golden Mile’, a twelve pint pub crawl through their nondescript English hometown of Newton Haven. Fast-forward 23 years and the group have long since parted ways. Peter (Eddie Marsan) is a partner at a car dealership, Oliver (Martin Freeman) a high-end estate agent, former band-mate Steven (Paddy Considine) is a fitness-obsessed architect, and Andy (Frost) – Gary’s onetime best friend – is a successful lawyer, far happier to forget the excess of his youth than he would be to relive it.

And then there’s Gary. Still dying his hair jet black and wearing the same trench coat that was his signature in 1990, his attempts to reunite the group are met with understandable levels of both cynicism and bafflement. Indeed, throughout the film’s early stages many of the laughs come from just how arrested Gary’s development has been for the past two decades. Arriving to pick-up his friends in a car bought during their teens, a cassette Steven once compiled ever present in the tape-deck, Gary is unchangeable in both matter and mind. “It’s pointless arguing with you,” the group frequently comment – an observation Gary only sees as a compliment.

Yet even with Gary’s man-child nature raising smiles – especially in his attitude towards alcoholic abstinence (“A man of your legendary status drinking f**king… rain!”) and his questionable views on disabled toilet users (“We don’t know what they’re thinking, really…”) – it’s not until the film reveals its secondary genre that Wright really hits his stride. With Shaun of the Dead serving as a love letter to zombie films and Hot Fuzz offering an ode to action, in The World’s End it’s science-fiction’s turn, with a series of pub floor punch-ups soon suggesting that Newton Haven has fallen victim to an invasion of alien automatons.

And what punch-ups they are! With Wright’s combat direction clearly honed by 2010’s Scott Pilgrim vs. the World (after all, this is the man who made Michael Cera look tough), his fight sequences are both physical and flowing, with clever edits creating the feel of unbroken shots and excellent choreography keeping stunt doubling to a minimum. Many a drunken man has convinced himself that his bar room fighting skills would match up to Jackie Chan’s, but only Wright could create a world in which it proves so brilliantly true.

For all its fun and fisticuffs, though, the film also possesses some surprisingly sombre moments, with revelations about Pegg and Frost’s characters threatening to upset the balance between comedy and drama. Shaun of the Dead and Hot Fuzz had their moments of sensitivity, but the subject matter explored with Gary and Andy is infinitely more delicate, sometimes leaving a feeling that complex issues have been left unresolved by the need to return to laughs. Yet these are ultimately minor quibbles. With great gags, better fights, and more fan pleasing call-backs than you could hope for, The World’s End is exactly the sort of British-accented, genre-blending pleasure we’ve come to expect from its creative trio. And the Cornetto joke? Well, that might just be the best one yet.

Previous: Peter Capaldi cast as The Doctor – our two penn’orth
Next: Harrison Ford to replace Bruce Willis in The Expendables 3