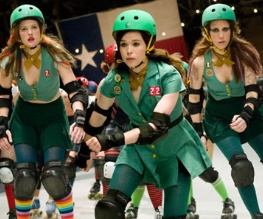 Whip It is to feminism what GPS systems are to driving: a voice confidently telling you you’re on the right road, whilst you can’t help but stare around wildly, wondering where the hell you are. Sexy, grubby and exciting to watch, Whip It is certainly a cut above your average chick-flick. We’re happy to roll their way, though we’re not totally sure where they’re taking us.

Juno star Ellen Page plays Bliss Cavender, a misfit teen who’s desperate to get away from the pageant world her mum forces her to be a part of. When not being fitted for her next evening gown, Bliss hangs out at the Oink Joint with her best mate Pash, where they wait tables and dream of lives far more awesome-based. Bliss is desperate for a change, and it comes in the unlikely form of The Hurl Scouts – a local group of roller derby girls, whose tattooed arms, made-up faces and bad-ass short short shorts represent everything Bliss craves. She dons her skates, secretly rocks up to try-outs and on making her team her whole life changes. Along with her fellow scouts, including “Bloody Holly” (Zoe Bell), “Smashley Simpson” (Drew Barrymore) and “Maggie Mayham” (Kristen Wiig), Bliss dons a new idenity: “Babe Ruthless”. And feels like finally, her life is beginning. But how much can she hide from her family?

Whip It is Drew Barrymore’s directorial debut, and we have to say, we’re pretty bloody impressed. Whip It is colourful, enthusiastic and effusive, the pace is great and the roller-derby sequences are nail biting to the last. What’s great about this premise is that all the ladies in the cast do actually appear in the derby battles themselves, making the whole thing a lot more believable and visually exciting. And how often do we get to see fishnetted skater babes beat each other black and blue on a race-track?

See, this is where this roller film seems to go off course a little. In itself, the premise of youthful dreams vs adult protection is nothing new, and the plot follows the standard sports-movie set up of “the upcoming Big Game vs Other Commitment Of Some Kind”. What is different is that fact that this time around, we’re watching a group of ladies beat the shit out of each other. And looking pretty bloody cool whilst doing it. So the question is, is this an ushering in of post-post feminism? Where women wrestle in fishnets whilst the blokes look on appreciatively, but its all OK cos “they’re doin it for themselves”? There’s no doubt that this is a film about the empowerment of women, but there’s also no denying its an empowerment based on sexuality. Is that cool? We don’t even know anymore. But roller-skates are fun, so that’s the main thing.

Either way, there’s no denying that Barrymore has turned out a fun, fast and entertaining spectacle that will be enjoyed by girls and guys alike. It’s certainly an indie-alternative to your average rom-com, and delivers a good few unexpected answers within its traditional guise. These girls certainly pack a punch, and if nothing else, you’ll certainly be left wanting to lace up some skates of your own. Keep on rollin ladies.

Did Barrymore’s directoral debut live up to hype? Let us know your thoughts below!

Previous: Human Traffic
Next: 5 Reasons Why James Bond Is A Chump