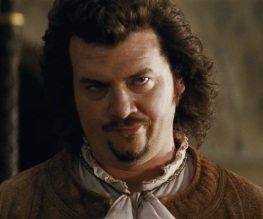 Few films, one would imagine, find their impetus in college drinking games, but that is exactly where Your Highness has its genesis. So the story goes that back in film school director David Gordon Green and actor/writer Danny McBride would pitch speculative film titles to each other from which they would reverse engineer a movie premise. Your Highness is one such conception that has lingered in the minds of the duo for years, and only with their recent rising profile has come the opportunity to make the film that is, in their own words, “about a prince in the Middle Ages that smokes weed and fights dragons”.

While the central character Prince Thadeous (McBride) certainly smokes weed, he leaves the dragon-fighting to his dashing, heroic and, well, princely brother Fabious (Franco). Forever in his Fabious’ shadow, Thadeous is a vulgar, lazy and largely inept layabout with little ambition beyond getting laid. All this is set to change however when Fabious’ bride to be, Belladonna (Deschanel), is kidnapped by the evil wizard Leezar (Justin Theroux) and the two princes are tasked with her rescue. Joined by the squire, Courtney (Rasmus Hardiker), the gallant Knights Elite and (eventually) a vengeful huntswoman named Isabel (Natalie Portman) the two brothers embark on a quest beset with peril, treachery and… minotaurs. If this sounds rather more sophisticated than the stoner spoof that the glorious punnery of the title suggests that’s because Your Highness is categorically not a spoof. Green is on record as saying he “didn’t ever want to approach it satirically”, and this is apparent in the accomplished and surprisingly original mythos which he has created. No, it isn’t exactly Lord of the Rings but it does demonstrate a surprising amount of invention, of which an impressive battle with a warlock’s enchanted fist is a standout moment. In this sense Your Highness shows an honest love for the fantasy genre, with ‘80s gems like Conan the Barbarian, Krull and Highlander being genuine inspiration rather than easy targets for a jeering derision. As serious as it might be as a homage, Your Highness is still a ultimately comedy and it’s here where the sketchy drinking game premise really starts to unravel. Having eschewed satire as well as (apparently) scripted gags Your Highness places its faith in the on screen chemistry and off-the-cuff banter of its stars. While this risky move isn’t a complete failure – out of context swearing is funny, if a little cheap, and McBride’s natural skill for endearing buffoonery is entertaining – it isn’t enough to carry the whole movie. More problematically the vulgarities and juvenile japes create a certain amount of incoherence that seems to undermine Green’s earnest intent and obvious respect for the fantasy genre. This is not to say that a serious fantasy film has to be played completely straight, but Danny McBride screaming “Fuck yeah!” as he slays monsters or a Minotaur sodomising someone is far cry from a Cap’n Jack Sparrow quip or any of the The Princess Bride’s endlessly quotable witticisms. Your Highness on the whole is a well realised fantasy that frustratingly oscillates uncomfortably between earnest, big-budget adventure and base and puerile stoner comedy. Although hilarious in places, it will probably leave those expecting non-stop laughs feeling short changed, and worse those seeking humour that transcends juvenile shenanigans wholly disappointed. It is, overall, a fairly unique and ambitious concept which, while enjoyable, is ultimately misjudged.