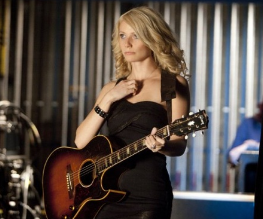 “OMGZ, Gwynnie can SING?!” Yes, she can. She can sing perfectly well. And so can Garrett Hedlund and so can that other one out of Gossip Girl. Country Strong would do well to gear its marketing towards these facts, as unfortunately pushing the tale itself won’t do it any favours. It’s a shame too, because this tale starts out as a delicately tender love story about an alcoholic singer and the man who wants to save her: genuinely absorbing chemistry all over the shop and an interesting character dynamic that draws you in like cattle to some grits (or whatever country people sing about). Somehow though, it ends up a big old mess. Blame the vodka, everyone else does.

When we meet super-star-gone-bad Kerry (Paltrow), she’s crooning happily on a rehab bed with her “sponsor” (read: sex monster) Beau (Hedlund). Although she’s not due out for another month, she seems healthy, happy, and more than content to sit with a handsome gentlemen dreamily batting around country ballads. But her husband and manager James Canter (Tim McGraw) is impatient to get Kelly back on the road and back in the spotlight – it seems her fall from fame was quick and extremely painful, and the only way to claw back respect, fame and fortune is to get her performing again as soon as possible. When Kelly presents James with a deal: she’ll go back on tour only if Beau (a singer-songwriter in his own right), can open her shows, he agrees on the condition that they take along sweet-faced young pop/country singer Chiles Stanton (Leighton Meester) to open with him. Uninterested in anything except Kelly’s welbeing and a love of singing about whiskey and putting on/taking off your boots in various places, Beau agrees to tag along. He doesn’t much care about the fame game, but someone has to be there to make sure Kelly stays on the wagon… What starts out as a interesting and delicate love story between the deeply haunted Kelly and the almost paternal young Beau is quickly beaten down by the writer/director Shana Feste’s desire to cover every possible subplot around it: Kelly’s drinking, Kelly and James’ marital relations, Kelly and James’ tragic past relations, Beau and Chiles’ developing sexy relations, Kelly and Chiles’ volatile relations, Chiles and James’ possible relations – with so many strands dangling and time running out the only way to tie them all up is to resort to spine-slumpingly dull cliché. The initial, charming chemistry between Paltrow and Hedlund is rapidly squashed by the desire to make this film about LOADS OF IMPORTANT STUFF, and with the only interesting character tension tossed aside, following the surrounding players feels a bit pointless. Credit where it’s due, Hedlund gives a truthful and lovely performance as the kind-hearted Beau, and if we follow this tale through anyone’s eyes (/pants), its his. It all gets rather too much (for both the audience and Paltrow’s acting abilities) about half-way through, when any faith you had in the characters has been thoroughly extinguished by both their constant, ridiculous decisions and by the fact that they’ve all insisted on singing country music for like an hour with no sign of stopping. From then on it’s just all a mess of booze, weepy weepy ‘messages’ and stomping about in grief-lined leather boots towards a finale that couldn’t be more obvious if you painted the details onto Miss Gossip Girl’s taut breasts and flung her on-stage naked (see the director’s cut for more details). All in all, it’s actors doing that singing business perfectly well, in a film that is far, far too dependent on that fact. Watch for lovely Garrett, stay off the booze kids and for God’s sake leave the soundtrack well alone.

Previous: New Scorsese on the way!
Next: Life, Above All