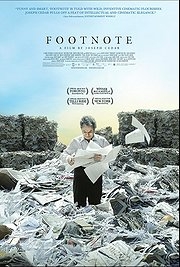 Films about academics tend to hinge on one key plot point; the (boyishly handsome) professor protagonist needs to be rammed into an unexpected situation as soon as possible and allowed to prance around being incongruous. It happens in Indiana Jones, it happens in The Da Vinci Code, it happens in A Beautiful Mind – even School of Rock and The Nutty Professor are culprits. In fact, films about academics actually being academic are relatively rare – just one of the many, many reasons why Footnote is unique and wonderful.

Life isn’t easy for Professor Eliezer Shkolnik (Bar-Aba). The dedicated philologist has spent his life working on some of the most obscure aspects of Talmudic history, but bad luck and the influence of a competitive and influential colleague have conspired to mean that his greatest accolade is a footnote in a rather more well-known academic’s masterwork. All this is bad enough, but Eliezer’s real sorrow is his son Uriel (Ashkenazi), a significantly more populist scholar whose relatively airy-fairy theses on marital relations in ancient Israel and the like have brought him fame and honour. Labouring in obscurity is one thing, but it’s quite another to be in the shadows because one’s child is blocking all the light.

However, Eliezer’s prayers all appear to have been answered when he is abruptly told that he’s won the Israel Prize, a prestigious award which in recent years has gone to crowd-pleasing academics with more accessible bodies of work than his own. Eliezer is thrilled, as is his son – Uriel bears his father no ill will and is keen to see him achieve the recognition which he has always deserved. But when Uriel is summoned to a meeting of the Israel Prize selection committee he is given a worse piece of news than he could ever have imagined; the award was intended for him, and his father was notified due to a clerical error. Learned as he may be, there seems to be no way for Uriel to think his way out of this predicament… I don’t think I’ve ever been so totally surprised by a film. The first few minutes of Footnote are relatively pedestrian, bombarding the audience with facts about Eliezer and Uriel in a dizzying storm of voiceovers, CGI, onscreen writing and, on top of all that, subtitles. However, within minutes the complex and duplicitous context of the film becomes clear; Eliezer bubbles with resentment and a desire to be recognised, whilst Uriel is torn between the love and anger he feels for his father as well as trying to deal with his own truculent son. Nobody ever says what they mean, leaving pivotal moments in the hands of dispassionate third parties – just as Uriel is trying to decide how much he can sacrifice for his father, he reads a newspaper interview in which Eliezer comprehensively trashes his work.

Watching this film without any prior information, one could be forgiven for mistaking it for a Coen Brothers production. Quite apart from the prevalent Jewish theme, Footnote is riddled with the intertwined plots, dark humour and consummately skulful characterisation which distinguish Joel and Ethan’s work – and it certainly wouldn’t be out of place on their Oscar-littered CV. Lior Ashkenazi and Shlomo Bar-Aba have perhaps 95% of the film’s screen time between them, and they use it to huge effect – the dedicated but unfulfilled Eliezer, very much a role played against type by veteran comic Bar-Aba, is a particular pleasure. The largely classical soundtrack is extraordinary, building to melodramatic peaks which perfectly counterbalance the inevitably understated mise-en-scène (library… study… archives… library), and the occasional forays into visual effects fulfil a similarly surreal role. Footnote is Israel’s entry for this year’s Best Foreign Language Oscar. Unless another film manages to combine wit, pathos and technical perfection in an even more pleasing and touching way within the next four months, I’d like to think it’s a safe bet.