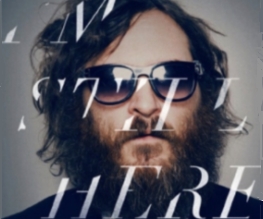 Joaquin Phoenix has spent his whole life in front of cameras. With I’m Still Here opening with home video footage of a young Phoenix playing by a waterfall, we soon flash-forward just one year to see “The Phoenix Family” on television as a child entertainment act, destined to go far. Barely has the actor ever had a minute to himself, resulting in an existence that he describes as “chicken and egg” – is Phoenix an individual the media reports on, or simply the person the media wants him to be? Only one thing is certain; he doesn’t want to “play the character of Joaquin” anymore.

Or does he? Director Casey Affleck recently confirmed Phoenix’s behaviour as the performance piece many had already suspected it to be and with his film’s credits suggesting his cast of performers are playing versions of themselves as well as boasting “Thank You” list of Hollywood royalty, I’m Still Here may have shed its documentary status, but by no means has it lost the capacity to engage.

“I’ve been laughed at before. Have you seen some of the movies I’ve done?”

Amusing at times, saddening at others, the film follows Phoenix as he “retires” from acting and makes a determined but doomed attempt to become a rap artist. But with the actor exhibiting worryingly bipolar levels of both manic elation and overwrought despair throughout, the film is more dramatic character study than awkward mockumentary – although you may still find yourself watching through your fingers.

You’ll laugh as Mos Def stumbles to respond to Phoenix’s desire to create a “hip-hop Bohemian Rhapsody”. You’ll gasp as the star snorts cocaine and gets intimate with hookers. You’ll cringe as he plays awful demo track “Compli-f*cking-cation” in an attempt to impress Sean ‘P. Diddy’ Combs (“Why did you choose hip-hop?”, asks Combs, “Do you think its f*cking funny?”). Yet even during its most painful moments, I’m Still Here always remains morbidly compelling.

“Yeah? Well I want a f*cking joint, but life is not a f*cking…Christmas Day”

As matters progress, Phoenix’s behaviour only becomes increasingly unreasonable and soon he is accusing anybody he can of sabotaging his career. In one moment he hurls verbal abuse at a close friend, claiming to be good enough to “shit on his face” (a comment he later comes to regret), whilst another well-publicised incident sees an audience member fall victim to a more physical attack (ironically occurring during what would have been the star’s best received rap performance). Driven to both tears and nausea by an awareness of his wrongs, there is a real sense that Joaquin has thrown it all away – “I’ve f*cked my life”, he sobs after his now infamous Letterman appearance – and yet the film’s ultimate message takes matters even deeper.

“Dreams are dreams,” Phoenix naively reads from inspirational children’s tale, An Awesome Book, “and that is why dreams are worth having around.” I’m Still Here charts a man’s descent into incoherence, aggression and nervous paranoia in the name of following such dreams. Phoenix (the character) reaches for a new life, but – when it proves unattainable – it provides a blow that his psyche simply cannot take.

With a closing image that brings us full circle, the rakish child of the film’s opening now replaced by a bloated and hirstute adult, we are left with a thought provoking question. What makes us who we are? The media were quick to judge Phoenix’s actions during the filming of I’m Still here (“He’s mad!”, some yelled, “It’s a hoax!”, cried others), yet just as a cameras cannot show us how a boy becomes a man, nor do they always show us the truth. Joaquin Phoenix might still be here, but only one person knows who he is.

Previous: Solitary Man
Next: The Kid