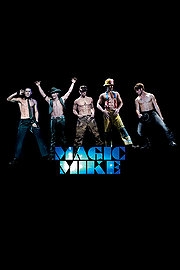 It’s nice when actors we’ve pigeonholed and subsequently dismissed do something to make us sit up and take them seriously; for Channing Tatum, 21 Jump Street was a fine attempt, but Magic Mike was the real deal. That he had to get naked to do it is merely a karmic equaliser; women have been doing it for centuries (see Lady Godiva). What saves that move from seeming desperate and gratuitous is the film’s rock-hard core of substance, and a veneer of style that is far from seedy.

A little exposition for you, before we strip the film down to its latex skivvies. “Magic” Mike (Tatum) is Head Stripper #1 A+ Gold Standard Naked-Man at Xquisite, a male revue run by the charismatic and totally shady Dallas (McConaughey). He’s flanked by such characters as the agonisingly well-structured Big Dick Richie (Manganiello), picture-perfect Ken (Bomer), and Mickey Rourke-alike Tarzan (Nash), amongst other slightly more forgettable beefcakes. When Adam (Pettyfer) shows up at Mike’s construction job and promptly gets himself fired for nicking Pepsi, he does exactly what you imagine Pettyfer would do; he goes straight on the lash. One thing leads to another, someone overdoses on the rankling Tobias’ (Gabriel Iglesias) ‘Hey Juice’ (dealer-speak for refined GHB) and thus our youngest and most dickish Xquisite employee is born. Sexy stripper shenanigans, as you can imagine, ensue.

It’s only here that the infamous stripping starts in earnest; that the film forces you to pay attention to its plot for a good twenty minutes, insinuating that you won’t hear a thing once balls start flying is a cocky move to make. So cocky, in fact, that you almost don’t want it to be good stripping. Just to prove a point. How attractive does Channing Tatum think he is, exactly? Takes more than a bicep or two to blow the average woman’s short-term memory to smithereens, matey. Unfortunately, he is deeply, profoundly, embarrassingly right. So right that it hurts in our special place. Well, maybe not ‘hurts’, per se. The pack of them obviously being the Pentagon’s next WMD (The Orgasmatron 3000™) aside, there’s genuinely bags of talent AND cocaine shared between these men. They’ve got a remarkable grasp on exactly what sexuality is, the nuances of how to show it and how aggressively they need to sell it. Combine that with the distinctly metatheatrical element of the whole strip club setting – you’re in their audience too – and you’ve got something pretty powerful. Can we just take a minute to remember that this is CHANNING TATUM. THE MENTAL CRIPPLE OF STEP UP, CHANNING TATUM. Who knew?

He continues to dazzle in a non-visual way as the plot predictably thickens; Adam falls further off the rails, Mike’s erstwhile fuckbuddy Joanna (Munn) makes an oversexed nuisance of herself, while he falls for Adam’s continually exasperated older sister Brooke (Cody Horn). Horn, who resembles the lovechild of Julia Stiles and Kristen Stewart in a mix which shouldn’t work but does, wryly sneers through enough moralising judgement for both her and her dumb-dumb dancers. Fresh off his comedic turn in 21 Jump Street, Tatum’s delivery of the stellar line, “How pregnant did you get that girl’s mouth?” is second to none, and it’s the first really concrete proof of this film being a shit-ton of fun. Serious undercurrents aside, it’s a hilarious picture. The dressing-room scenes are redolent with an atmosphere of vice, vino and virility that’s infectious and seductive; and then Pettyfer’s admittedly far-better-hung-than-expected self comes along to ruin it. Well, not ruin it. His portrayal of a bad boy gone worse is exactly what you’d expect of a 19-year-old boy in his position, except for the feeling that he doesn’t sell it so well because he’s talented, but because he’s actually just a bit of a knob. And that’s a shame amidst a cast who are handing in such lovely performances.

Equally unfortunate is Tatum’s intense desire to play with the big boys. As producer (as well as star), Tatum teams up with Steven Soderbergh to quite severely hobble the overall delivery of Magic Mike. Rather ambitiously, Soderbergh was not Tatum’s first choice for director; that was actually Nicolas Winding Refn, the man at the helm of 2011’s Drive, a film responsible for one of the best roles Ryan Gosling has played this decade. Were we Soderbergh, we would be on the warpath trying to wrangle an apology from the Buff One; Refn is all over this fucking thing. From the yellowy, marijuana-fuzzy haze coating most of the frames, to the long, lazy geographical journeys across Tampa, Florida, there’s a lot of what made Drive so beautiful to watch involved in the aesthetics of Magic Mike. Tatum however, is no Gosling – god, can we all just take a minute to envisage him in this role – and sometimes crumples under the weight of his own effort, however adorably earnest it is.

That said, Channing Tatum and Steven Soderbergh are to be commended. Magic Mike is a trailblazer in so many ways; whilst it’s certainly rare for a film to be made by men for female consumption, it is rarer still that that film would actually be engaging on both a physical and emotional level. Seeing Magic Mike is a unique sort of pleasure, but it’s exactly the sort you didn’t know you wanted.

Previous: The Rise and Fall of a White Collar Hooligan
Next: First trailer for Fifty Shades of Grey released