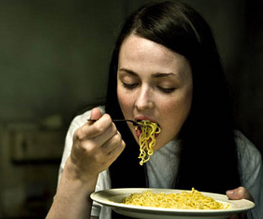 The short film format is a deceptively tricky one to get right: too much content and the narrative gets swamped in underdeveloped strands and ideas; go the other way and the risk is run of turning in a ‘concept’ piece, the bête noire of all those cantankerous, old-fashioned souls who advocate film as being primarily a medium of story, damn it. There’s a happy medium to be found, and Ruth Paxton’s Paris/Sexy locates it – the long-short running time of 23 minutes helps, to be sure, but there is more in this bleak and provocative rumination on the nature of isolation to commend it than length.

Greer (Missy Malone) is on the cusp of womanhood, physically at least, though she has the responsibilities of a woman twice her age. Her days and nights are spent caring for the residents of an old age home and for her own father (Finbar Furey), a housebound schizophrenic. Into this malaise crashes Françoise and Seamus, an evocative couple who she brings home to the ramshackle house she shares with her father. Games are played, lines are crossed, and all does not end well.

Martin Compston brings a grimy charm as Seamus, the provocateur of the piece whose nudging and wheedling feed off the ballast provided by Elisa Lasowski’s weary but complicit Françoise, as the pair contrive to shove the younger girl rudely through the doorway marked Womanhood. And, as young Greer, it’s Missy Malone who is the stand-out performer, striking a fine balance between burgeoning sexuality and innate repression that serves as the story’s motor.

David Liddell’s cinematography is striking, stark and atmospheric as it cuts from wide-open countryside vistas to the claustrophobic interiors of Greer’s home, and Tim Mathew’s innovative sound design is fundamental in the portrayal of a key character, almost a character itself. It’s all well marshalled by Paxton – who also wrote the script, which moves along at a good pace yet seems at times to linger, and is only let down by a contrived, apocalyptic final few minutes.

Check out our interview with Ruth Paxton here.