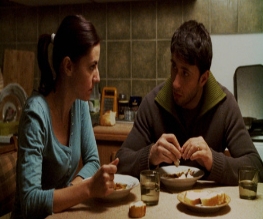 There doesn’t seem to be a lot to do in the Romanian capital, Bucharest. The town is small, the streets are pretty empty and I can’t work out if no one actually lives in the town or they’re all just hanging inside by the fire, eating tripe soup and drinking vodka. It’s probably why one hash smoking lad and his two hash smoking friends stand out, and why their misdemeanour seems to be the only crime worth following.

And follow it we do. The first long sequence is in complete silence as we follow the smoking boy to school. And whilst beleaguered cop Cristi isn’t happy about stalking (who would except Alex Forest?), he seems to spend an awful lot of his time doing it. Pointless? Well, yeah. The futility of the task comes from the fact that Cristi doesn’t actually want to arrest the boy. He’s having some moral dilemmas with the whole enforcing-the-law-but-not-ruining-a-stoner-child’s-life kinda thing.

And that’s pretty much it. For 113 minutes. Police, Adjective may be seen as a “cop drama”, but don’t expect guns, screaming sirens or the constant “Yes, Ma’am”. This isn’t The Bill. Rather refreshingly, Police, Adjective is less about making crime look exciting and more about the day-to-day tedium of a cop with a conscience. Throw in a couple of lengthy discussions; one with wife Anca (Irina Saulescu) about grammar, and another with the captain about what ‘conscience’ means, and you’ve got yourself a film for the quiet and attentive observer I hope you can be. “Captain, the boys are here..”

Police, Adjective isn’t there to schmooze us. It unapologetically keeps us waiting for a crux, a bit of action or a comedy banana-peel slip. But this is where it stands out. Why should it have to pander to our short attention spans and craving for gimmicks as we sit there watching like greedy, spoilt children? Like Mary Poppins, it is firm but fair. On the surface, the long stretches of silence and shots of dismal Romania are about as fun as a deflated balloon, but there’s a raw honesty to be admired. In the words of Ivana Trump, “it is what it is”. Whilst Cristi sits in the waiting room with the vigorously typing receptionist, Gina, we wait with him. The director, Corneliu Porumboiu doesn’t speed up the waiting process for an impatient audience – rather, we experience the time passing as Cristi does and forge a connection with the otherwise quiet and distant character.

Playin’ it cool. Dang, it makes me want it even more

The dialogue that does occur ranges from functional to more intellectual discussions. There’s no falseness and we are made aware that the characters are not having them for our benefit. We are there to press our faces against the window. I’ve always had a thing for overhearing conversations but people generally realise I’m listening on the tube and try to show off with their stories. Police Adjective feels no need to impress us, and whilst we may feel disheartened with the apparent lack of effort, there’s something cool about the lack of try-hardness. As a film, Police, Adjective is very human. It treats us as equals, rather then kneeling at our feet, desperately trying to keep us entertained. Far from being convoluted, the dialogue exchanges are poignant and necessary as well as economic. And whilst the drama may not seem as in your face as a firework, it hits you on a more relatable level and forces you to acknowledge that life isn’t one big party; there is cleaning up to do between each celebration.