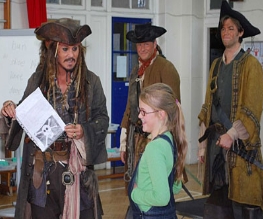 A pirate in a school seems about as welcome as a wasp at a picnic. All those young and impressionable young brains to play around with. And if you’re as cool as Captain Jack Sparrow, with your dreadlocks, smokey eye make up and slightly camp mannerisms (he’s so cool, he doesn’t need to prove his masculinity) then you could say anything and the kids would take it as the gospel. Dangerous.

Hopefully the kids at Meridian School, Greenwich, realised that Johnny Depp is way cooler as himself.

But it’s good to know that all you need to do is write to actors these days in order to squeeze an appearance out of them. That’s what little Beatrice Delap did. Although it’s slightly worrying that she wrote to Johnny Depp asking him to help her and her “budding young pirate” friends, “mutiny against the teachers”. Anarchy in the UK? Hello, Johnny Rotten.

Johnny Depp has been filming the latest film in the Pirates of The Carribean instalment in the Old Royal Naval College, so a quick visit to a nearby school wouldn’t have been too much bother. Although, it does make me wonder how he got to the school. A flamboyant pirate would not be able to fade into the background in quiet Greenwich; it’s no Camden, after all.

So children, if you wanna be the coolest kid in school then write to a pirate and get him to visit. With a distinct shortage of piracy these days (I blame the credit crunch) it seems they have oodles of free time.