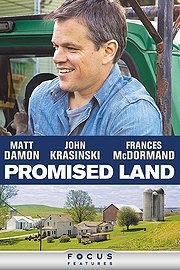 Damon plays Steve Butler, a devout employee of a billion-dollar corporation that specialises in acquiring land for the purposes of fracking (extracting natural gas from beneath the ground). When Steve and his colleague Sue (McDormand) are deployed to a small farming town to convince the residents to let his company drill on their land, and are confronted by an upstart environmentalist called Dustin (a blinding performance from Krasinski), Steve’s professional and personal outlook change forever. 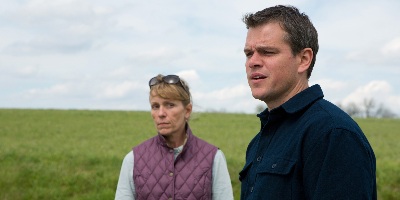 Promised Land looks like a feature-length TV programme on paper, but the sweeping, unhurried shots of the pretty landscape remind you that this is a film. Nature seems to be the buzzword – even Steve’s company Global is after a natural resource – and there’s a lovely simplicity in seeing green fields, lakes and dairy cows in such stunning vistas. When Steve and Sue arrive with their clipboards, boardroom patter and Skype, it’s very jarring and out of place compared to the little town where everybody knows everybody (this is shoved down our throats a little too much); but it works wonderfully.

Van Sant lets his actors do the work, and doesn’t waste time trying to wow us with off-beat camera angles or slow-motion. Scenes never drag on and all the entertainment needed comes purely from what is said. It makes one wonder just how much of an influence Damon, also credited as producer, had on the final product. Promised Land is definitely a vehicle for the actors involved. Every star at one point or another gets an impassioned monologue that departs an emotional back story and every star sinks their teeth into it with relish. 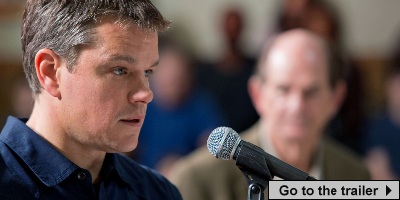 Damon, as the intelligent, quietly ambitious everyman with a big heart, is clearly doing what he does best. He doesn’t steal the show by any means, in fact he is often left in the shadow of his co-stars. McDormand might be one to watch come awards season; not because she does anything particularly outstanding, but because her performance is exactly what the Academy lap up: crotchety older character with all the best lines. Think Tommy Lee Jones in Lincoln or Alan Arkin in Argo. What is great about Sue is that she’s the best out of the two female characters in the ENTIRE film. The other, DeWitt’s school teacher Alice, should have been wearing a T-shirt that read “OBLIGATORY LOVE INTEREST” in all of her scenes. Krasinski (who, even in a cap and three-quarter length khakis, is hotter than July) is absolutely one to watch. This could be down to the fact that he lent his hand to the script and therefore knows his dialogue inside out, but he really is the standout performance. His transition from plucky and awkward yet determined green campaigner to…well that would be telling. But it’s brilliant and more than a bit chilling. 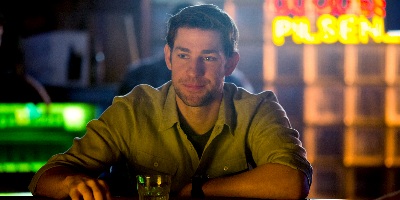 The “boorish big companies vs the little people” idea is played on throughout: Steve callously bribes the local politician who suddenly has ideas above his station, while back in the city his company wages (successful) legal wars against wronged small-town farmers. By the end, we are told that multi-million dollar corporations are The Big Bad and destroy everything in their path on a professional level – and a personal level, in this case – which is true in some real life situations. However we’re never given both sides of the argument. Global is evil, full stop. 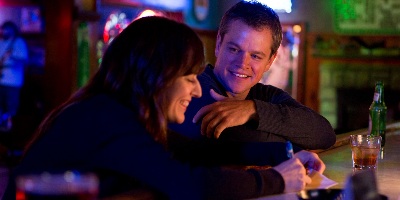 As mentioned at the start, it’s unclear why we’re being told this story. If the issue of small towns being taken over by money-wielding corporations has suddenly reared its ugly head recently in America, then this film has a place and a point to make. To really enjoy this film though, it is better to look at it as a decent, cinematic drama that hinges on strong central performances; rather than an opinion piece that has a hard-hitting message to convey.