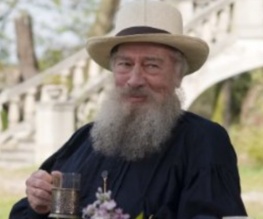 In truth, were it not for Christopher Plummer and Helen Mirren‘s Oscar nominations as Best Actor and Best Actress, Michael Hoffman’s history lesson could have bypassed the big screen and debuted on DVD. This is a handsome, Sunday afternoon costume drama with a fleeting sex scene to set pulses racing. We see this world through the eyes of Valentin Bulgakov (James McAvoy), the newly appointed private secretary to the great Leo Tolstoy (Plummer), who arrives at the writer’s estate to find himself in the middle of a very public war. Tolstoy’s devoted disciple Vladimir Chertkov (Paul Giamatti) intends to persuade the writer to sign over the rights to his works to the Russian people. Countess Sofya (Mirren) vehemently disagrees, determined that the considerable fortune belongs to her family. As the tug of war over Tolstoy’s legacy becomes increasingly heated, involving his favourite daughter Sasha (Anne-Marie Duff) and personal physician Dushan Makovitsky (John Sessions), Valentin experiences the pangs of love with devoted Tolstoy acolyte, Masha (Kerry Condon).

Who doesn’t love an in-joke?

The Last Station hinges on the verbal sparring between Plummer’s world weary artist, replete with impressive beard, and Mirren’s embittered spouse, who creates more drama than her husband could ever commit to the page. “Tomorrow, I’ll go to the station and lie down on the track. Tolstoy’s wife becomes Anna Karenina herself. See how the papers will like that!” she screeches during one heated exchange, “This is unbearable“; retorts the author. “You don’t want a husband. You want a Greek chorus!“;

Not Your Usual Love/Hate Story

Giamatti doesn’t stretch himself greatly, while McAvoy lets his beautiful, blue eyes fill with tears in a largely reactive role. The tiny railway station at Astapovo provides a suitably cold setting for the characters’ final moments together, when Sofya’s frustrations with Sasha boil over – “You are a stone-hearted bitch… I lost five children. Why couldn’t one of them have been you?” – and the Russian people bid farewell to a literary titan. Grainy, black and white footage of the real Tolstoy and Countess, and the public outpouring of love and grief at Astapovo, give us pause for reflection over the end credits.

How did you find the magic between Plummer and Mirren? Let us know below!

Previous: Centurion
Next: My Name Is Khan