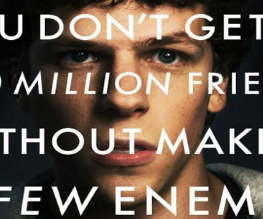 As The Social Network‘s opening scene makes abundantly clear, Mark Zuckerberg (Eisenberg) is not exactly a people person. “Why do you keep telling me I don’t need to study?” demands girlfriend Erica (Mara). “Because you go to B.U.” comes Havard student Mark’s inconsiderate reply. The relationship is soon over. But when Mark gains recognition for a spiteful website created in the wake of their break up, it is not long before he finds himself approached by muscular twin jocks, Cameron and Tyler Winklevoss (Hammer), and their business associate Divya Narendra (Minghella).

Dismissing the brothers’ campus based directory scheme as “match.com for Harvard guys”, Mark combines their inspiration with his own and is soon wading knee-deep in the latest internet phenomenon. But when “The Facebook” becomes a hit, Mark fast finds himself on the receiving end of not one, but two lawsuits; one from the unacknowledged Winklevosses and one from Eduardo Saverin (Garfield), his progressively shunned co-founder.

With its narrative jumping between Mark’s simultaneous court cases and the events that lead him there, The Social Network presents a fascinating dichotomy of a man attempting to reconcile social ineptitude with a desire to be recognised. Mark’s inability to empathise with others could almost be excused as autistic if his aim wasn’t so painfully clear; Facebook will be “cool”. Inspired by newfound mentor, Napster creator Sean Parker (Timberlake), Mark is plunged deep into a world of fast-talking Machiavellian metaphor. After all, who’d want a photograph with fourteen average sized trout when they could reel in a 3,000lb marlin? Forgetting his friends, he becomes loyal only to his creation – though it is never made clear whether Mark’s actions are deliberately cruel, or just startlingly blinkered. “There’s no requirement that I enjoy being here, listening to people lie.”

Whether the story of The Social Network is an accurate one is difficult to say – after all, as one of Mark’s advising lawyers puts it; “with emotional testimony, I tend to assume it’s 85% exaggeration.” What is clear, however, is that this is excellent filmmaking on all fronts. That screenwriter Aaron Sorkin manages to captivate with a story that seems so sparse is testament to his talent. With his dialogue setting the pace from start to finish, it’s startling that a film so talky can also prove so exciting. Similarly, Fincher is not wasted, with an excellent montage that juxtaposes Mark’s early creation with the debauchery of a Harvard Final Club providing just one example of his directorial skill.

The performances, likewise, are uniformly excellent. Garfield draws significant sympathy as the jilted best friend and even Timberlake’s smarmy Parker is an unexpected joy. Yet it is Eisenberg, undoubtedly, who serves as the film’s lynchpin. Perfectly capturing a sense of both determination and social anxiety, his performance comes to a head in one brilliantly acted scene. As Eduardo screams at Mark in room full of colleagues, Eisenberg’s welling eyes and quivering lips sum up his character in one expression. With his face showing fear, regret and more than a hint of embarrassment, could Mark finally be getting the reality check he so clearly needs? Perhaps. If only there wasn’t an unshakeable feeling that, even during this, part of Zuckerberg’s mind could still be thinking about code.

Previous: Knightley and Theron in Princess Diana Battle
Next: Despicable Me 3D