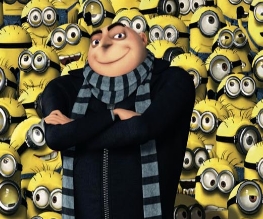 Supervillain Gru’s (Carell) life seems pretty sweet. He lives in a criminal-styled house with an abundance of helpful minions, he has handy weapons all over the shop which means he never has to queue for coffee, plus he drives a monster vehicle, making him king of the road. Although it does seem he’s compensating for something. But life is hard when you realise you have become second fiddle. Especially in the supervillain ranks. It’s kind of like realising your not the coolest kid on the block when the new boy arrives at school with the latest yoyo and replaces you on the swimming squad.

I’ve often wondered how supervillains earn their crust. Maybe they’re getting job seekers allowance whilst they’re planning their latest scheme. Gru thinks there’s money in the moon and plots to steal it. But his villain loan application is turned down and his shrink ray is stolen by Vector (Segel), a spoiled, techno-brat who has a thing for sea creature-powered guns. So Gru moves in three orphans in order to seek revenge on the yuppie. But kids are like plants; they need a suitable environment and plenty of attention. Even Daddy Warbucks realised that in the end. Whilst the helpful cinema clerk turned to me and said “You know it’s a kid’s film” to which I replied “Yeah, I’m well into that shiz” with bravado covering my shame, I think I ended up finding Despicable Me more enjoyable then my fellow child spectators. Certainly I heard myself laughing more.

“We stole the Statue of Liberty…the small one, from Las Vegas.”

The delight in Despicable Me lies not just within some of the clever one-liners delivered with perfect comic timing, but also in the cross referencing. With Gru’s minions reminding me of a cross between oompa loompas and those alien toys who worship “the claw” in Toy Story paired with Miss Hattie, Texas’s answer to a pudding-faced Miss Hannigan, it’s a delight to see homages to other films. Yes, cinema clerk, it may very well be a kid’s film, but I will find my own enjoyment in the child-orientated humour.

But being a sophisti-cat, the slapstick humour in the film didn’t do anything for me. But it’s not really my bag; Charlie Chaplin wouldn’t even get me to laugh. The kids will love the fart gags, though and the way in which the minions punch each other unnecessarily. It’s such a shame as the minions were probably my favourite bit. I kind of want one for a pet; they’re helpful, could fit in your pocket and you could use them as a stress ball. The use of 3D adds to the film, especially in the space scenes and when the moon is featured. And when the girls and Gru are riding on the rollercoaster, SO ARE YOU!

My main concern with Despicable Me was that it took a while to get into it. The last three quarters are a lot funnier then the first. And there is that common feeling that they put the best bits in the trailer. Plus, the three orphan girls melting Gru’s villanous heart is a bit of a sentimental trick. It may have made me cry but I could still see what they were doing. And I will NOT be had.

So whilst it’s not perfect, it is truly enjoyable, with the sweet ending sliding down like a cup of hot cocoa. The 3D effects enhance the fun, the millions of minions are wonderfully individual, and it just goes to show that even if you have the latest gadgets and a shark swimming in the floor in your house, it doesn’t make you a better supervillain. So give up with that squid gun.

Previous: The Social Network
Next: Neds