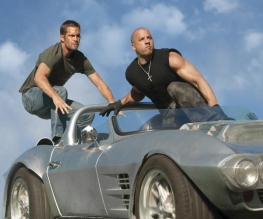 Following his incarceration at the climax of the previous film, and duplicating the mid-credits animated sequence with added wow-factor, Brian O’Connor (Paul Walker) and Mia Toretto (Jordana Brewster) rescue Toterro sibling Dom (Vin Diesel) from his bus prison and seek refuge in Rio de Janeiro. Angering local baddie Hernan Reyes (Joaquim de Almeida) during a last job, the trio must get a team together for one last last job if they are to evade capture either at the hands of Reyes, or the authorities lead by federal agent Luke Hobbs (Dwayne Johnson).

I have a number of guilty pleasure franchises, which surface from the depths of critical disfavour whenever Mike Leigh’s realism and Michel Gondry’s visual quirks get too much to bare. Whenever Milla Jovovich takes a break from trouncing her resident evil and Indiana Jones forfeits adventure for a spot of bingo, I like nothing more than to watch Vin Diesel be bald and Paul Walker have hair against a backdrop of fast cars and gyrating buttocks. With cinema ultimately headlining the entertainment industry, the Fast and the Furious franchise has a hefty lead in unashamed enjoyment.

Justin Lin’s Fast Five, the director’s third instalment in the series, serves as a veritable greatest hits as it reunites assorted characters from previous entries with franchise stalwarts Diesel, Walker and Brewster. The camaraderie that ensues imbues procedings with a lightness and banter that helps carry the contractual lunacy through to its wonderfully proposterous end. With Dwayne “The Rock” Johnson providing the requisite new blood – and fresh face-veins – the cast is complete in it’s knuckle-headed entirety. Screw Alien vs. Predator – forget Freddy vs. Jason – it has always been about Vin Diesel vs. Dwayne Johnson, Riddick vs. The Rock, The Pacifier vs. The Game Plan – and the resultant conflict doesn’t disappoint. While the two together couldn’t act their way out of a facial expression, they tear into their surroundings like a couple of scrap-happy Terminators, taking down walls and out-rippling one another with absolute glee. The action all around is uniformly spectacular, with a pregnancy-proof roof-top chase sequence and reality-defying last act drag race certain to floor your jaw with as much verve as Diesel puts pedal to the metal.

While the film might be 50% establishing shot (we’re in Rio. Rio de Janeiro. Did you see Christ the Redeemer, you might recognise it from Rio?) and composed almost entirely from some unsuspecting teenage wank-bank, it is impossible to resist the boys-own charm of this testosterone drenched fifth instalment. Like some steroid-heavy episode of Top Gear where Jeremy Clarkson’s promised anything and everything he’s ever wanted if he promises to go two hours without insulting prostitutes or using unnecessarily big words.

Leave your brain in the passenger seat, and let the road take you wherever it pleases, and you’re in for a reliably delirious ride. Complete with a post-credits sequence that will have you praising the sequel’s swift green-light, Fast Five is a breath of fresh air for this less than exhaust-ed franchise.