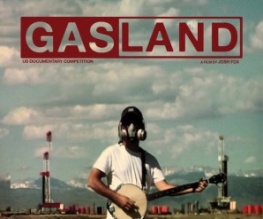 Corporate America gets another boot in the face from Josh Fox’s exposé on natural gas drilling, entitled – funnily enough – GasLand. If Sarah Palin’s shrill rally cry of ‘Drill, baby, drill’ pissed you off then this documentary is really going to get your goat, depicting as it does yet another case of companies blithely raping the planet, ruining lives for wealth and industry. But after the plethora of awareness-raising issue documentaries and the BP oil spill in the past couple of years does GasLand come at a time of fatigue? Will Fox’s effort be in vain and will he be preaching to the converted? It’s hard to imagine somebody seeing this and becoming an activist.

Any law-abiding, tax-paying citizen wouldn’t expect their tap water to ignite into a ball of flames, but that’s exactly what started to occur when natural gas companies started – sometimes literally – turning up in people’s backyards looking to exploit tapped sources lying deep within the bowels of Mother Earth. Fox’s documentary begins – or so he claims – when he received a letter in the post one fine day from a company asking permission to drill on his land in exchange for $100,000 dollars. A devil’s pact if ever there was one. Instead of accepting he does what any self-respecting film-maker does – he grabs his camera and starts filming!

Business people (the villains) give their marketing spiel about making Joe USA (the heroes) less dependent on foreign fuel sources but they never really discount selling it abroad to Johnny Foreigner. Families living within a radius of gas wells developed an abundance of medical problems and couldn’t even get access to clean drinking water anymore. Yes, this occurred in 21st century America. Is it the fault of companies and their practice of injecting over five hundred unsafe chemicals into the ground to extract the precious gas in a practice called ‘fracking’? There is no correlation according to the likes of Halliburton, Encana and other lying bastards.

Fox isn’t some crazy communist calling for a return to a medieval agrarian state, but he sure as shit doesn’t want his patch of land messed with. He makes for a slightly goofy onscreen presence and narrator and is far less annoying than somebody like Michael Moore.

In terms of cold, sobering facts there’s plenty to digest. While Fox comically rifles off chemical compounds and names of chemicals like they’re tongue-twisters, the brevity of the situation sinks in. Does the average person know what they’re breathing in and drinking from supposedly ‘natural’ environments and sources? Probably not, and that’s the way companies want to keep it. The less you know the easier it is for them to fool you and do what the hell they want. Especially when the companies are exempt from laws to do with protection of the environment!

GasLand is worthy, illuminating and sometimes funny – as all documentaries of this type are prone to be. But its ideals are a bit murky and unclear to warrant higher praise. It points the finger at businesses and greedy types and that’s about it; GasLand lacks real political bite and righteous fire in its belly.

Previous: The Reef
Next: Madagascar 3 gets a villain