And Soon The Darkness 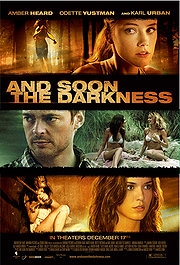 Despite being a remake of the 1970s British thriller of the same name, And Soon The Darkness bears little resemblance to its predecessor, exchanging as it does the deceptively bucolic French setting, suave Hitchcockian set-ups, and immaculate conclusion for a thoroughly inept and suspenseless tale. The only thing appropriated from the original (apart from the presence of bicycles) is the retro, cheesy porn-esque score, to which this impotent reworking awkwardly fumbles along, at near-interminable, excruciating length.

Ellie (Yustman) and Stephanie (Heard) are cycling through undefined Argentina, having ditched their official tour group. On their first night of freedom, the two hit the town’s (only) bar, knocking ‘em back, sluttin’ it up and generally cockteasing the locals into a collective swarthy sex organ of throbbing aggression. When Ellie predictably goes missing the following day, Stephanie has a hard time in tracking down the culprit and finding her bestie, and an even harder time in deciding whose help she can trust – that of an unhelpful, vaguely sinister policeman (César Vianco), or a hunky, vaguely sinister drifter (Urban). Developing this potentially gripping whodunit is, however, apparently unimportant to the film’s writer, Jennifer Derwingson, and director Marcos Efron. The kidnapper’s identity is discerned even before he’s had a chance to commit the crime, and the storyline makes its inevitable, seamless transition from mere banality to proper spirit-crushing tedium. Once every peripheral character’s meaninglessness to the labyrinthine plot has been established (taken care of within the first 20 minutes), what’s left of the narrative is, in short, a roughly 1 hour escape-attempt slog, masterminded by the nunnish Stephanie and frustrated by Yustman’s agonising over-performance as a brainless 12A Girl Gone Wild.

In the just world of celluloid, Stephanie’s bovine intensity and Ellie’s whinging, whining death throes should earn them their rightful end – via a spectacular, extended act of brutality – but alas, no slaughterhouse segue, nor torture-porn setpiece, awaits the long-suffering audience. A frantic handful of abruptly artsy shots of the menacing outland environment provides a momentary respite, but remain embarrassingly out of place, spliced into an otherwise lethargic series of events. And Soon The Darkness eschews all manner of climactic build-up and eventual satisfaction. Offering up neither joyous gore nor mind-funking arousal, and concluding exactly where it began – in the middle of nowhere – the simpering remake will leave you with little more than a hard-on for something intelligibly uncouth. Or just plain intelligible.