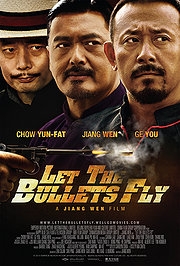 Even if I somehow manage to live past thirty, I doubt any film festival I ever visit again will be able to offer me an opening gambit quite as perplexing as this year’s BFI London Film Festival. Let The Bullets Fly, the new film from multi-talented actor/director Jiang Wen (last seen starring opposite Donnie Yen in The Lost Bladesman), perfectly demonstrates the maxim that genre clichés expand to fill the running time available. It’s not that Let The Bullets Fly isn’t fun, it’s just a bit exhausting.

The year is 1920, the Chinese republic is less than a decade old and individual cities are still ruled by corrupt governors and ruthless warlords. ‘Pocky’ Zhang (Jiang) is neither; he leads a band of outlaws who kick-start Let The Bullets Fly by spectacularly derailing a train containing the new governor of Goose Town. However, when Zhang and his men sift through the wreckage they find out that Governor Ma is actually a conman called Tang (Ge), who along with his wife was on his way to impersonate the governor and raise some fraudulent taxes. Zhang promptly pinches this nifty idea and rides in state to Goose Town with Tang’s wife (Carina Lau) on his arm, Tang himself posing as his counsellor and his gang of bandits bringing up the rear.

Unfortunately for Zhang, Goose Town is not quite the soft touch he’d expected it to be. Local underground kingpin Master Huang (Chow) has long maintained an iron grip on the poor people of the area, and is dismayed when the preferential treatment he’s received from previous governors is replaced by Zhang’s stated intention to tax the rich and spare the poor further hardship. What follows is an epic battle of wits as each wily crook – the bandit, the con man and the gangster – strive for dominance over the others and over Goose Town. Will Zhang’s compassion and morals win the day? Will Huang’s resources and nifty body double (HELLO) carry him to victory? Or does Tang have the guile to regain his ill-gotten former glory? You may have forgotten to care by the time the two and a quarter hours are up… If you can somehow avoid losing your mind amidst the torrents of dreadful CGI, spectacular overacting and Chow Yun-Fat laughing like something from Goosebumps, Let The Bullets Fly is actually quite entertaining. It’s massively, catastrophically too long, that goes without saying (it’s not even as if the film needed the extra three quarters of an hour), but the joyously surreal plot does keep up with the action; the impression I got was that it could have been judiciously cut, rather than that it had been needlessly dragged out.

There are some fabulously dark and witty moments – “My ass hurts,” moans a character on the verge of death, before Zhang points out (not unreasonably) that it’s unlikely to be doing anything seeing as the chap’s entire bottom half is in a tree some fifty feet away – and the action dances a fine line between genuinely impressive choreography and deliciously mental slapstick violence. It’s hard not to be impressed by the hugely energetic central performances and Jiang’s inventive direction, which fuses visuals lifted wholesale from Sergio Leone with distinctly Oriental stylings (case in point: Zhang convenes an impromptu court and forces a martial artist to perform 100 kowtows to a noodle vendor for kicking him through a massive ceremonial drum. Serious). It may occasionally veer towards self-indulgence, but it’s great fun. I can’t really imagine anyone going out of their way to see Let The Bullets Fly, but if you stumble across is on Film4 in a few years don’t change the channel. Thrilling, stylish, funny, violent, melodramatic and deeply ridiculous, it’s as good a way to pass the time as any.

Previous: And Soon The Darkness
Next: Second trailer for War Horse now online 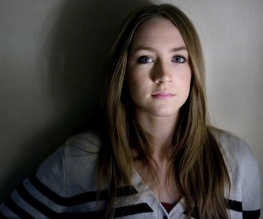