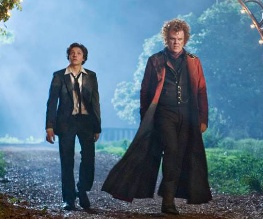 Darren Shan is some sort of genius. Not only has he managed to write a kid’s book snapped up by Warner Bros, but most conveniently, he has also written 11 more.

Allegedly, the first instalment of Shan’s Cirque du Freak series cost the film giants a ten figure sum. One can only imagine how much it will cost to see out the journey of this tale of ancient vampiric feuds, morbid circus folk and a lad reluctantly inflicted with immortality.

Still, there’s no denying that Warner Bros have chosen the perfect time to unleash this kiddie tooth-fest, hot on the tail of mega-hit Twilight, it would appear that blood is the new black. When we were wee nippers, Enid Blyton constituted exciting reading fodder;  foiling smugglers on a beach, following smugglers to a cove, and generally, well, there were a lot of smugglers. Nowadays however, it’s all feeding on immortal souls and unleashing power of magical evil. How times change.

The film itself, considering its bloodythirsty audience, is surprisingly gore-less. Which would be fine if the pace and dialogue was pumping with life, but sadly despite director Paul Wietz’s effort,  it all seems a little anaemic. The problem with such a complex, 12 book plot is that it takes an entire film to set up. By the time you’ve finally got a grasp on which vampires hate who, unravelled the cameo appearances in the ‘cirque’ itself,  and heard why the protagonist -also named Darren- has caused such a stir in the first place, well, it’s time to go home.

All this could be forgiven however, had the characters been those you could really sink your teeth into. Sadly, good boy Darren (Chris Massoglia) just doesn’t really capture the heart or attention of an audience restless for action. The potential for laughs is left almost entirely up to John C. Reilly’s character,  Lartan Crepsley; the vampire that leads young Darren into the dark world of the undead. Reilly, although delivering a dry and humorous performance, doesn’t quite bring this film back to life. Kids will love the colourful visuals and gross-out humour, but there’s not much meat here for grownups. Perhaps its best not to judge this Circus too harshly; it feels as though we have seen the warm up act, not the main performance. Still, with the vampire bandwagon grossing millions, it wouldn’t be surprising to see more from this gang. After all, even in the most macabre of circuses; the show must go.

Previous: Saw VI
Next: The Invention of Lying