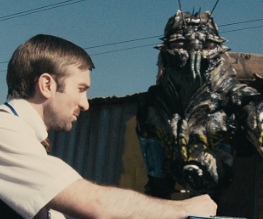 Central to this forced removal is Wikus van de Merwe (Sharlto Copley), a company Yes Man and son-in-law of amoral MNU director, Piet Smit (Louis Minnaar). During the evacuation, Wikus gets sprayed by a mysterious goop that one of the aliens seems anxious to keep hidden – and soon finds himself siding with the neglected refugees in more ways than one. As he begins to transform, MNU closes in, anxious to use his half-alien abilities to capitalize on the visitor’s exotic – and deadly – weaponry.

District 9 actually reminded us – in a damn good way – of Jackson’s earlier forays into mixing splatter horror and comedy. Any laughs here are usually at the expense of some unfortunate goon being blown to bits. It’s a cruel kind of humour, but one that works exceptionally well considering the design and tone of the film. The sense of realism and immediacy is heightened admirably by Blomkamp’s impressive use of documentary-style camerawork, which seamlessly blends human actors and CGI aliens.

But District 9 isn’t purely concerned with special effects. The parallels to South African apartheid are obvious, but not laboured or overly hammered-home to the audience. Our sympathies are definitely with the aliens here, as their expressive and intelligent design and execution makes for compelling viewing. Particularly entertaining are the exchanges between Wilkus and his new-found friend, alien renegade Christopher Johnson (Jason Cope) – there’s a great punchline when Wilkus translates how long it’s going to take his arm to return to normal.

Smart, slick and with a nail-biting and explosive finish, District 9 is the thinking man’s sci-fi film. Only occasionally does the film wobble where Blomkamp perhaps tries to do a little too much at once – but that’s a minor quibble in a film that otherwise delivers on every level.