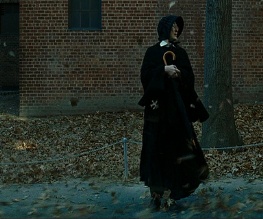 Catholic schools. Nuns. Priests. Sexual abuse allegations. All topical concepts when they’re thrown together in this day and age, but would the combination of these four words make a film we’d want to see? Probably not. At best, it would be dull, at worst quite disturbing. Nevertheless, given the Oscar hype surrounding this adaptation of John Patrick Shanley’s play last year, the cast of Hollywood gargantuans in leading roles (Meryl Streep, Philip Seymour Hoffman, Amy Adams), and, well, the fact that there wasn’t much else that was good at the DVD store, we decided it couldn’t be that bad.

The year is 1964 and at the typically strict St Nicholas School in the Bronx, progressive priest Father Flynn (Hoffman) is trying to get the parrish to move with the times, which as we all know, never goes down particularly well where the Catholic church is concerned. Still, the likeable Flynn has become a powerful nemesis for the school’s principal, Sister Aloysius Beauvier (Streep), who’s more your traditional cold-as-ice, whack-’em’-with-the-cane type. When young novitiate Sister James (Adams) confides in Sister Aloysius that she witnessed a possible inappropriate moment between Flynn and the school’s first black student, Donald Miller (Joseph Foster), the Sister embarks on a mission to prove Father Flynn’s misconduct and get his namby-pamby liberal ideas out of St Nicholas once and for all.

One of the many questions Shanley, who directed this film adaptation of the play as well, leaves the audience to ask is whether it’s Flynn’s possible paedophilic acts or his progressive attitude that is the true motivation behind Aloysius’s determination to bring him down. Does she truly believe he is guilty, or does she not really care? Is Flynn an evil sexual predator, or an innocent victim of the cold war between political revolutionaries and the conservative institution that was going on in both the church and the US as a whole at the time? Shanley never answers these questions directly, but leaves them intriguingly hanging, creating a spooky, Crucible-esque atmosphere of suspicion and tension with his minimalist sets and soundtrack. The film still resembles a play, with dialogue and silence rather than action and location changes driving the narrative forward, which takes a little getting used to, but in this instance it adds to the power of the film’s message rather than taking away.

Acting-wise, it shouldn’t surprise anyone that Streep is the stand-out. She embodies every inch of her schoolboy’s-worst-nightmare character, from the harsh Queens accent to the waves of intimidation emanating from her very persona. Hoffman tries hard to make his self-righteous leftie stand out, but he’s not given as much to work with as his stunning performance in Capote. The same goes for Adams, who’s in typical fragile little flower mode – her fear and guilt at having started the witch hunt for Flynn is believable, but not compelling.

As a whole though, mainly due to Shanley’s challenging directing style, Doubt emerges as a unique and thought-provoking film. It leaves us with more questions than answers, but if you’re the type of person who loves to dissect a movie for hours after coming out of the cinema, this one is for you.

Previous: Who’s to Play Bilbo?
Next: Danny Boyle Takes Frankenstein To The Stage