Sam Raimi‘s cult classic Evil Dead has been controversially resurrected, but, despite a few new plot additions, director Fede Alvarez hasn’t quite managed to breath new life into the story. It has some satisfying similarities with the original – gallons of spewing blood, an integral chain saw, an evil force rushing through the forest at an ungodly pace and non-consensual tree sex – but RIP low-budget aesthetics and downright silliness, you are greatly missed. " /> 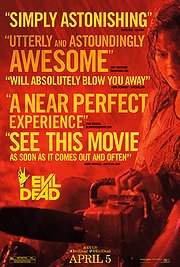 Guys, come on, I’m just sayin’, maybe coming to this creepy cabin in the woods wasn’t the best idea for a relaxing weekend away… But, now that we’re here, maybe just avoid opening that hatch and going down those rickety stairs into the darkness of the cellar? I know there’s that ambiguous noise and a smell like something’s died down there, but even so. Oh, okay. Well, now you’re down there I just think it’s probably for the best not to touch anything – particularly that evil looking book made out of human skin – I mean, those thick chains and barbed wire could be there for a reason, you know? Ah. Well. Now you’ve opened it maybe just don’t read it out loud. You never know, those blood written warnings which say “Do not read out loud”, could be trying to tell us something. FINE THEN, READ THEM OUT LOUD. Look, I wasn’t going to say anything, but I’ve seen the original Evil Dead – and this may not end well. 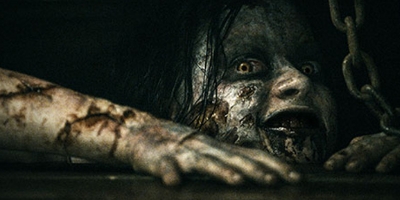 Director Fede Alvarez (with the reassuring backing of Sam Raimi and Bruce Campbell) promised this new foray into the woods would have all the qualities of a worthwhile remake: it would be respectfully true to the original and add a whole new dimension to the story. From the get go there are some interesting, and not so interesting twists. In the opening sequence a scruffy girl with her hair covering her face limps through the forest. We are in a familiar setting but this “new dimension” is immediately apparent by the extra dollar thrown at it. Gone is the shaky hand-held camera zooming across marshy waters that have been attacked by a smoke machine and in its place is a crisp image which looks like a million other Hollywood horror films. The scruffy girl is promptly whacked on the head, tied to a stake and some inexplicably inbred looking locals attempt to set fire to her. Naturally, this young innocent seems scared and confused – until she has a sudden change of heart, and voice, and face – and says something along the lines of “I’ll rip your souls out you pathetic fucks!” (she is ACTUALLY POSSESSED). A defining feature of both Evil Deads is the uncanny ability of the possessed person to act un-possessed and the poor sucker who’s trying to kill them always fall for it. Here, for the first time… we’re the poor suckers. 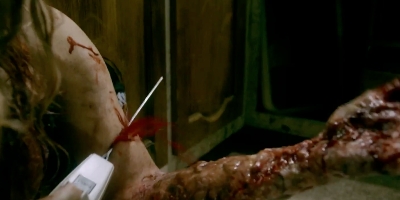 The back story of the characters is also explored in more depth. Ash has been replaced by a (distinctly less iconic) David (Shiloh Fernandez), whose reason for holidaying in this god-awful place is that his drug addicted sister, Mia (Jane Levy), is going cold turkey. They are joined by three unmemorable characters: Olivia the nurse (Jessica Lucas), Natalie the bland blonde (Elizabeth Blackmore) and Eric the schoolteacher (Lou Taylor Pucci). Mia, who seems to have some sort of inexplicable drug induced sixth sense, claims she can smell rotting corpses, but everyone just thinks it’s an excuse to leave the cabin and get high – that is until they find lots of very dead pigs hanging in the cellar, along with the NATUROM DEMONTO, or The Book of the Dead. The not-as-clever-as-he-looks (he’s wearing glasses for God’s sake!) Eric ignores the various warnings and, not only reads it, but reads it OUT LOUD and things start getting weird. Mia gets raped by a tree, then a demon possesses her and she goes on a murderous rampage – but everyone’s not too worried as they just think she’s on a bit of a comedown. One by one the inhabitants of the cabin in the woods gets possessed – going from nice stereotypical teenagers to just being plain rude (they say things like “get raped in hell!”) gross (there’s a bit with a tidal wave of blood vomit) and angry (two words – bodily dismemberment). 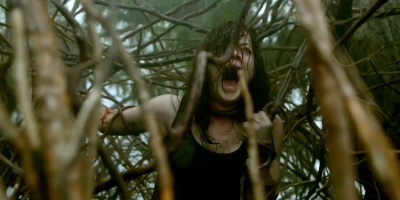 The nods to the original are enjoyable, but they’re not executed with as much directorial originality or silliness: the evil force zooming through the woods is similarly impressive, but sadly it’s not portrayed as a character that can slink away like a frightened puppy if the door shuts in its face. Though, what this film lacks in campness it makes up for in pure terror. In the original Evil Dead, the demonically possessed resembled colourful cackling clown zombies, but in this one they’re more like the girl from The Grudge – which isn’t as original, but is very scary indeed. Like the original IT IS RELENTLESS, there’s just no end to mutilation – self and other. Chekhov famously said “If in the first act you have hung a pistol on the wall, then in the following one it should be fired”. This is certainly true in Evil Dead, but not just of pistols, of anything seen in the first act which could possibly be used as a weapon – that nail gun, that hammer, that meat slicer… 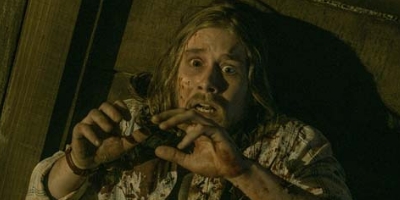 Evil Dead just could never be as gloriously unique as its original. This is not a cult classic, this is a particularly well made, scarier than most, formulaic Hollywood horror movie. I suppose Alvarez has stuck to his promise – to be true to the original but add an extra dimension – but it still reminded me more of Joss Whedon’s parody The Cabin in the Woods than The Evil Dead. Nonetheless, if you’re into gory, relentless horror and/or abusive trees – you should give this one a watch.

Previous: P. Diddy has been cast in a sports film
Next: RED 2’s new character posters 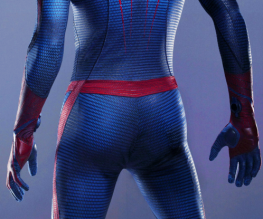