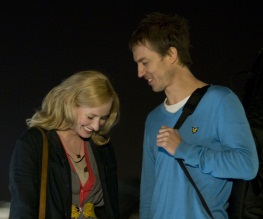 Forget Me Not begins, essentially, with our two protagonists saving each other’s life. After playing a gig in a trendy underground bar Will (Menzies), attempts suicide in his flat through a cocktail of drink, drugs and a razor blade. However, when he sees the pretty barmaid Eve (O’Reilly) from the gig getting accosted by a drunk outside he is forced to act and intervene, and so begins ninety minutes of contrived, mawkish, immature nonsense as Will and Eve stroll through the streets of London on their way to a party.

If the plot sounds somewhat familiar that’s because it’s basically the plot of Before Sunrise. In both cases the action centres on the two characters getting to know each other over the course of the film, and indeed the supporting cast is minimal, with pretty much all of the dialogue afforded to Will and Eve, and therein lies the problem. If you are going to attempt to make a film so heavy on dialogue and naturalistic conversation, then the acting and the script have got to be of the highest quality, which is not the case here. The romantic tête-à-tête between the two sounds more like the kind of late night MSN conversations you had with your mate when you were 15, that you would subsequently describe as “really deep”. A scene in which the two begin to dissect the existential question of “Why did the chicken cross the road?” is frankly a little embarrassing. In situations such as this one is often compelled to say that the actors are doing their best with what the script they have been given, though in this film it would be unfair to lay the blame squarely in the hands of the scriptwriter. Menzies plays Will with a strange mix of arrogance, insecurity and pomposity as he attempts to paint himself as the ‘tortured artist’. However, it seems that when there’s even the slightest glint of a shag on the cards he picks himself up, instantly switching from brooding and alone to cheeky-chappy man with guitar, as when he serenades a pissed up hen party dressed as nuns with an improvised song about how they’re not actually nuns. Also, it must be said that Menzies’ miming is terrible. The songs he’s playing aren’t difficult, and even the most average of actors would have learnt a few chords. Not him it seems. O’Reilly is slightly more watchable as the barmaid Eve, though again her character is overwhelmingly one-dimensional. She’s the barmaid with the troubled childhood who just wants to help people, only working in a bar to pay for her nurses training, in what might be the oldest cliché in the book. You have to feel sorry for O’Reilly though, as it seems as if, given the right roles, she could be in the same league as Carey Mulligan or Keira Knightley, she’s certainly no worse. However, previous credits which include The Matrix (Reloaded and Revolutions, not the good ones), Star Wars (Revenge of the Sith, not the good ones) and Avatar (from 2004, not the go…well, famous one) suggest that she needs someone to start picking better parts for her.

Directors Alexander Holt and Lance Roehrig do often distract from the script and the acting with a varied and interesting array of shots, and some nice framing throughout. To give credit where credit’s due they use London very well as a backdrop, often foregoing establishing shots to instead give us the sense that we, like Will and Eve, are simply aimlessly wandering around the city. There too are some lovely aerial shots of Westminster as Will and Eve go for a morning jaunt on the London Eye. However, it’s not enough to save this film from being anything but average.

Previous: Romantic quotes from films – The reckoning
Next: Save our Independent Cinemas! This week: the Rich Mix