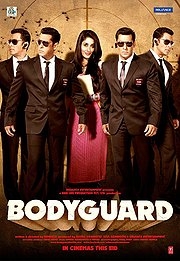 Okay, so I’ll admit it; when I heard I’d been tasked with reviewing Bodyguard this week, I wasn’t exactly over the moon. The trailer just did absolutely nothing for me. Salman Khan came across about as wooden as Arnold Schwarzenegger, only without the humorous robotic accent.

Doesn’t it seem like it might be a rehashed version of The Bodyguard? From the trailer, the only difference is a high school diva rather than Whitney Houston. Yet, weirdly, I found myself getting insanely wrapped up in this surreal flick. Ever heard of the phrase ‘it’s so bad it’s good’? Ok, so the story IS very similar to The Bodyguard, there’s no denying that. Salman Khun is, well, the bodyguard of this flick and his name is Lovely Singh. Not exactly the Bruce Willis of hardcore names, but I suppose that’s the point of it all; the poor guy has to act totally badass at all times, even delving into Matrix-style slowmo fight scenes, despite sounding like he’s an Indian drag queen. Nevertheless, he’s been charged with protecting Divya Rana (Kareena), the highly-strung daughter of Raj Babbar. However, Salman is completely bookish and more accustomed to going about properly suited and booted, usually with a pair of dark glasses to highlight the fact that he is a BODYGUARD. All bodyguards wear sunglasses, right? So we can imagine Divya’s dismay when she has to go to school with this guy in tow. He’s mistaken for the teacher, walks with his chest puffed out and, generally, makes campus life hellish. So she decides to get her sweet revenge by phoning him and posing as his secret admirer… Khan falls head over heels in love with his mystery woman (never catching onto her actual identity; what sort of a sh*t bodyguard is he anyway?) and Divya slowly comes to realise that she is in love with him. This nonsensical storyline sets us up for some catchy song and dance sequences, including the fabulously addictive I Love You.

Gradually, I entered a dazed euphoria usually reserved for coma patients and didn’t snap out of it until just before the big finale, when it became apparent that Siddique had grown bored with directing and handed the reigns over to his evil twin. Upon blinking and finding myself in a crowded cinema, I realised that the storyline had veered wildly off its predictable course and gone stark raving mental. Let’s throw in a twist, Siddique’s evil twin must have thought. Everybody loves a good TWIST, don’t they? We don’t always love a good twist. Especially when it fails to correlate with anything we’ve seen up until that point. I don’t want to give too much away, but let’s just say it has something to do with Divya’s best friend. This unwarranted turn of events got an audible gasp from cinema goers, I’ll give it that much, but I think it was the sort of gasp you let out when somebody chucks a bucket of ice cold water all over you, rather than a one of joyful surprise.

Anyway, to summarise, this is the sort of movie you can just watch and enjoy without requiring any thought-power whatsoever. The tunes are catchy, the dancing is amusing, the fight scenes show painstaking effort and the acting is acceptable. Oh and, should you find your attention slipping, try and count how many times Salman steps onto a broom and has the handle smack up into his face. We do love a good dose of subtle humour here at BFF, after all…

Previous: Venice opens with première of Clooney’s Ides of March
Next: Albatross