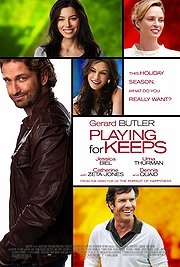 Playing for Keeps is a feel-good movie. As such, it follows a well-trodden path, drinking deeply from a formula that is as old as it is re-usable. In this case, the movie’s direction, pace and plot are recognisable from the beginning, and the audience is meant to know what is going to happen in the end.

The plot is simple. The film opens with doctored clips of Scottish football star George Dryer (Gerard Butler) scoring the winning goals in some of the most famous games of the last decade, shot in suitably grainy style. Cut to down at heel Scottish former football (soccer) star Dryer, who has inexplicably lost all of his money, and is reduced to selling his European Cup winners’ medal to pay his $900 security deposit. From the beginning, therefore, the film establishes its story as one plucked from the realms of fantasy. Can an inhabitant of the real world really conceive of this sort of thing happening? Even the most surface-level knowledge of the social and economic condition of western society in the present day would render the viewer aware that we are not dealing with a film about reality.

From thence we are made aware that this Scotsman is in Virginia to be near his young son, who is living with his estranged wife (Biel) and her mute fiancé (he has about two lines in the whole film). Rapidly, he ends up coaching the school soccer team, which naturally puts him at the centre of attention of the town’s array of beautiful, unsatisfied yummy mummies. These range from the hysterical Judy Greer (whose character, literally, breaks down in tears during her first conversation with Coach Butler on the soccer field, to flag up just how very frustrated she is), to the predictably sorted and sexual Catharine Zeta-Jones, to the visibly drugged up trophy wife of obnoxious business-man Dennis Quaid, Uma Thurman. Cue relations between Butler and all of them, as they (again, literally) throw themselves on his tender mercies. This is merely background noise though for the main theme of the film, which is Butler’s quest for redemption through proximity to his son, and there are plenty of predictable father-son bonding sessions to boot. 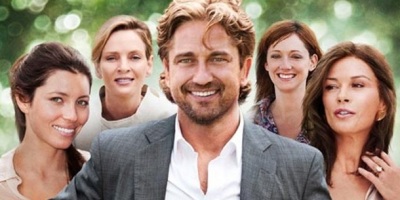 The economic plot is ridiculous in these times, and unrealistic. It is no longer possible now for a football star to find himself unable to pay a $900 security deposit. Repeat: it is simply not possible. This kind of hero-to-zero myth propagated by the film makers is an insult to the inhabitants of this unequal western world. Similarly, the depiction of the women of the film was uniformly clichéd and embarrassing, particularly Uma Thurman and her relationship with equally ridiculous husband Denis Quaid. Is this film trying to make some sort of statement about female inequality? If so it completely fails for myriad reasons, most obviously in using the tired formula of philandering wealthy jealous husband with trophy housewife who needs her needs fulfilled by manly-man Butler. Thurman looked high throughout.

Now I have a confession to make. Feel-good factor was effective in my case. Despite knowing very well what the film was doing, I still found it possible to imagine that this sort of cheap dialogue and formulaic structure could speak to the majority of the movie-going public (I have been proved wrong – no one went to see it). Maybe it was the domestic father-son, broken marriage, shattered dreams, down-at-heel scenario being saved and regained – the possibility that lives can be rescued – which got to me. I don’t know. 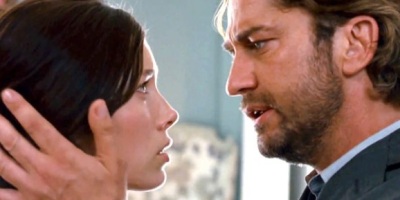 I suppose what I am trying to say is that this film knows its audience, and it panders to them. It gives them what it wants. To make a potentially ludicrous comparison, Shakespeare knew his audience in the 17th century, and gave them what they wanted. As You Like It is practically a play-through of pastoral-romance conventions. The big, and finally important, difference, aside from the quality of the writing, is that Shakespeare was able to slip in delicious morsels of nourishment for the reflective in his audience to chew on. He satisfied the high and the low requirements of the crowd. Playing for Keeps most certainly was not do that. It is another addition to the hundreds of hours of cinema produced every year which serves only the unreflective parts of our brains, and for that, I must condemn it, vindictively.

I feel slightly as though I’ve been mugged by this film. HOW DARE THEY MAKE ME CRY. IT’S CLEARLY RUBBISH. But it did. And I am thoroughly ashamed.

Previous: Alfonso Cuarón’s Gravity to land in October
Next: Orange(Wednesday)s and Lemons #98