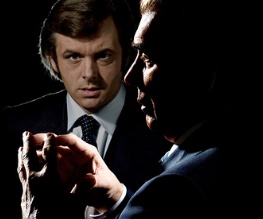 In these celluloid times, where Hollywood makes a film based on a political catastrophe five minutes after it’s happened, it’s pretty darn hard to make a biopic stand out in any meaningful way. If anyone could, though, it’s king of the all-American historical epic Ron Howard, and it helps if he has a Tony Award-winning play full of material to work with. This mix of Broadway hit, American directorial prodigy and two fantastic lead actors (Michael Sheen and Frank Langella) has certainly created some fascinating results in Frost/Nixon, which chronicles ex-US President Richard Nixon’s infamous admission of wrongdoing in David Frost’s interview series in 1977.

Howard’s film leads us into the action with a typical historical catch-up montage – news broadcasts from the time of the Watergate scandal, the oft-replayed footage of Nixon waving from the steps of the Air Force One jet after his impeachment. From this clichéd beginning, though, things get really interesting as the film splits into a dual narrative of both its protagonists’ lives. On the one hand, toffy talk-show host David Frost battles to be taken seriously by his colleagues as his plan to secure an interview with Nixon takes shape; on the other, the disgraced president himself lives impotently in exile in California, scrambling for a way back into political life. When the two men finally meet for the agreed set of interviews, Frost must find a way around Nixon’s arrogant bully-boy persona and his own fears of inadequacy to make him finally admit the crimes he committed in office.

Obviously it helps to be interested in politics if you’re going to truly appreciate this film, but unless you’ve been living under a rock for the past, oh, 30 years, you know enough about the story of Watergate to appreciate what’s going on here. And director Howard is at his Beautiful Mind best – the intimacy of the narrative he sets up makes you see these previously dull political players as three-dimensional, flawed men. You particularly want to see Sheen’s endearingly dippy Frost succeed and bring down the intellectual Godzilla that is Nixon, but when Tricky Dick is finally cornered into confession, you feel strangely sorry for him. Credit must go to Langella equally for his spot-on capturing of Nixon, a role he won both awards and acclaim for on Broadway – as with all truly great historical portrayals, you stop comparing the real man to Langella’s version halfway through and start doing the reverse.

So if Dad or perhaps your dry and politically-inclined housemate comes home with this from the DVD store, fear not the hours of boredom ahead. History nerd or not, you’ll find yourself unwittingly drawn into this battle-of-wits tale by the time the credits come up.

Previous: Who You Gonna Call? The Original Director!
Next: The 2010 Writers Guild Nominations Are In!