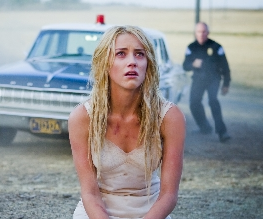 It’s been nine long years since John Carpenter’s Ghosts of Mars was released, a thoroughly underwhelming effort that threatened to represent an undeserving coda to one of cinema’s most innovative, groundbreaking careers. It was he who, with slasher prototype Halloween, kept the menace of his most famous creation Michael Myers arse-clenchingly draped in shadows, before exploding his own template by dragging the horrors of The Thing kicking, biting and screaming into the light. Yet for most of the 21st century he had been left to watch one execrable remake of his films released after another, while the man himself seemed consigned to see out his professional days working in television. Having said that, it was an episode of Showtime’s estimable Masters of Horror series (Cigarette Burns, a barmy detective yarn featuring a captured angel, and his best work since 1994’s underrated In the Mouth of Madness) that indicated Carpenter was no spent force, a notion just about seconded by this old-school chiller.

(Probably) pitched as Shutter Island meets Girl, Interrupted, the story opens with troubled pyromaniac Kristen (Heard) being picked up by the cops for indulging in her fiery raison d’être once too often (they catch her fairly red-handed, kneeling as she is in beatific supplication at the foot of a blazing farmhouse). Instead of jail she gets sent to ‘the ward’, a mysterious, female-only (hello, shower scene) wing in a mystery-filled hospital inhabited by teenage girls with mystery seeping from their very pores. Someone, or something, steals her blanket on the very first night and, even more annoyingly, begins despatching her fellow inmates in a variety of agreeably grisly fashions. Our can-do heroine endeavours to find out just what the bugger is going on while staving off the advances of cardboard-meanie nurses, possibly-bi babes, and the grisly Thing in the Night (okay, it’s a ghost).

It’s solid, spook-inducing stuff and everything unfolds pretty much as you would expect, a brazenly illogical ending apart. Jared Harris as the resident headshrinker aside, the performances are largely threadbare – which, if we’re honest, is par for the course with this kind of material. The requisite jumps are all here; Carpenter has lost none of his poise and timing when it comes to delivering those. What does seem missing, and has from his work for some time, is the sense of occasion, the thrill of being in the hands of a master at the top of his game as he goes feverishly about his work. Whilst slobbering uncontrollably, if possible.

Carpenter can do this stuff in his sleep. And even if he did it would still compare pretty favourably to most of the younger generation of horror-film makers, whose preoccupation with gore and bombast over revelation and nuance are anathema to a director whose mission statement is to terrify rather than revolt. Who of the new breed is truly holding the flame? Eli Roth? Rob Zombie? Please. Only Alexandre Aja and Guillermo del Toro look capable of one day attaining a place among the horror greats, so the return of Carpenter (and, soon, Wes Craven) is timely. But what we really hope for is another big push from the man, an effort to attain or even surpass the heights of Halloween and The Thing. Let’s hope The Ward is no more than a serviceable dry run for just that.

Previous: Top ten actors who should play Jesus
Next: Cruz and Bardem have first child