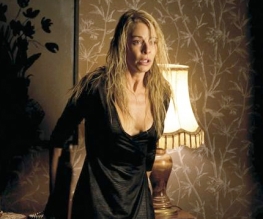 Seeing Guillermo Del Toro’s name on the posters for Julia’s Eyes may have you thinking about the the quality of Del Toro’s efforts. It doesn’t quite manage to live up to his efforts and while it’s nothing less than entertaining there are times where the conventions of horror serve to frustrate rather than entertain.

Julia’s Eyes follows Belén Rueda’s Julia, a woman slowly losing her sight whilst investigating the mysterious suicide of her twin sister Sara (who also suffered from a debilitating eye condition). As her condition worsens she hears word of a man involved with her sister around the time she died. Despite Julia’s insistence that foul play was involved, her husband Isaac (Lluís Homar) and the police dismiss her claims leaving her to try and uncover the truth. As she digs deeper, Julia is certain that someone is following her; but who exactly is this person and what do they want with her? Guillem Morales’ chilly, supernatural film is a confident, at times visually-arresting horror but is weighed down by a few heavy handed, artificial scares, a third act that’s initially confusing and some of the more annoying traits of the horror genre. You surmise that Julia’s Eyes understands that some of the conventions it includes are exasperating (an ineffective police force, nobody pursuing Sara’s death as suicide) but nevertheless includes them to pile the pressure on Julia. If you’re a fan of horror then Julia’s Eyes should appeal to you, if however, you’re hoping for a character that isn’t as stubborn in her ways as Julia then it could irritate you.

The main problem I have with the film is Rueda’s Julia. She’s the kind of character that refuses to listen to any advice, good or bad. If someone tells her to stay put odds are she’ll be running around in high heels with complete disregard for her own condition which, if it is as the film suggests, gets worst any time she puts herself under duress. Understandably she’s the kind of horror archetype that has to find the truth but she does this at the expense of the relationship with her husband Isaac. It makes her character somewhat frustrating as she repeatedly gets herself herself into trouble (by disappearing off alone without help), is attacked/stumbles on something important and then wonders why everyone is suspicious of her claims. The point is that with no one believing her claims it causes her to doubt herself but this happens over and over to the point where it becomes less interesting each time it’s done. That being the case, Morales gets a lot of things right. Whether it’s the moody, dark cinematography by Óscar Faura or the ominous sense of the ‘monster’ watching its prey, there’s a lot to admire from a technical perspective. A lengthy sequence half-way through the film that mimics Julia’s lack of sight, all bodies but no actual faces, is as dislocating as it is creepy. In not seeing characters’ faces so it becomes harder to judge them, casting doubt on the veracity of each characters’ motivation. The murky cinematography and the use of light is clever especially as the villain we’re dealing with is often referred to as a void, a black hole of sorts that no-one seems to acknowledge even if the person walks straight past them.

When the third act arrives, the film abandons its horror façade and turns into a thriller it becomes a little difficult to understand the intention of a few characters. Revelations occur, (some obvious, others wholly surprising), it’s a compelling if slightly messy end to the film. So while Julia’s Eyes is a little too long, it skimps on the gore and provides some chilly, effective shocks in its best moments. Horror fans should lap it up.

Previous: Franco to star in indie flick Cherry
Next: Top 7 Comics That Should Be Movies