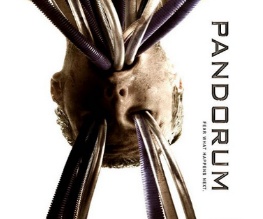 Space travel has always been an inexhaustable topic for film-makers, but upon watching Pandorum, you can’t help but feel like you’ve seen everything it has to offer before. And you’ve seen it done better. Though it’s made by the same guys who brought us Resident Evil, this film lacks any real originality and it’s consistantly dark and moody shots are more likely to leave you with eye-damage than anything else.

Part of an off-world colonising mission to save Earth from overpopulation, Ben Foster and Dennis Quaid wake up in their ship, completely disorientated from hypersleep, and unable to remember why they are there. What they do know is that their ship is low on fuel, and that some serious shit is going down in their spacecraft. And also that’s it’s very dark. They go on a search for other survivors, and along the way meet with far nastier visitors. Mutants have stowed aboard, and they’re not happy about the new disturbance.

The film is essentially a dark and claustrophobic chase film, with Ben and Dennis on a mission to save their shipmates against horrible kung-fu-zombie foe. Director Christian Alvart knows how to punch out elementary suspense in tight spaces, but each new survivor we stumble across is progressively worse company than the last, and frankly by about halfway through you feel like you’ve seen the same ‘oh my god it came out of nowhere!’ shots about five times. There are some sharp little twists and turns in the plot, but again, it’s not that you won’t be familiar with from somewhere else. The film registers like quite a lazy mash-up of Alien 3, Event Horizon and Spaceballs, and to be honest, you’d be better off buying any of them.

Previous: Is Percy Jackson The New Spider-Man?
Next: Prince of Persia is super at the bowl!