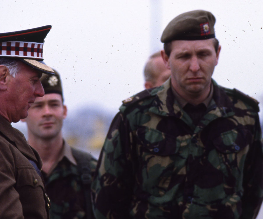 Resurrected is the debut film of director Paul Greengrass, who is perhaps best known for his work on the second and third Bourne films. The plot concerns a soldier, Kevin Deakin (played by David Thewlis), who is presumed dead after going “missing” for seven weeks during the Falklands conflict. Upon returning to England and his generically gritty, Northern rural-yet-strangely-industrial home town, his reception gradually sours due to rumours of his desertion- driven by his lengthy absence. This sets the stage for the inevitable decline into isolation and misery that often plagues homecoming characters across all genres of drama, what sets Resurrected apart as particularly unsettling is the real life basis of the events and its unrelenting bleakness.

Greengrass seems to be more interested in the impact that group opinion can have on the individual than on making wider social comments; the narrative is very focused on the problems that Deakin faces in the wake of the accusations, and on the Post Traumatic Stress he is suffering with. We are witness to the horrifying flashes of war that now mar Deakin’s daily life, his intimacy issues and his all round melancholy. The film pulls no punches in terms of portraying the mentality that conflict leaves soldiers with- both in their memories and their future actions- trust me, you’ll never look at a broom in the same way again after watching this film. Despite fair support from the rest of the cast (including the always reliable, and criminally under-used, Tom Bell) Thewlis carries this film, along with his character’s many burdens, with a broken resilience that indicates a sense of worthiness and necessity in the story telling. His portrayal of Kevin Deakin provides enough ambiguity to construct a case either for his innocence or guilt, but ultimately the audience is left to draw their own conclusions- not only as to Deakin’s “desertion” but ultimately as to the value of the truth.

All in all, the film is a solid character study of the barracks mindset, as well as the effects of community judgment on a single person; but if you’re looking for an uplifting film about heroics, then you’ll have to keep searching.

The DVD release is a little light on extras, featuring only two interviews: one with actor David Thewlis and one with director Paul Greengrass. Thewlis (looking more like the Professor Lupin we know and love in this new interview) comes across as a superbly charming man discussing the true story behind the film, his meeting with his character’s real life counterpoint and his general experiences as a young actor working on his first released feature film. He also points out the small role that Steve Coogan plays in the film (an ex-girlfriend’s new squeeze) which is rather lovely of him. Paul Greengrass’s interview is somewhat less engaging, but does offer insight into the world of first time directors and reminds us all of the importance of FilmFour in terms of bringing fresh British talent to the silver screen, a lesson to hold on to in this post- BFC era.