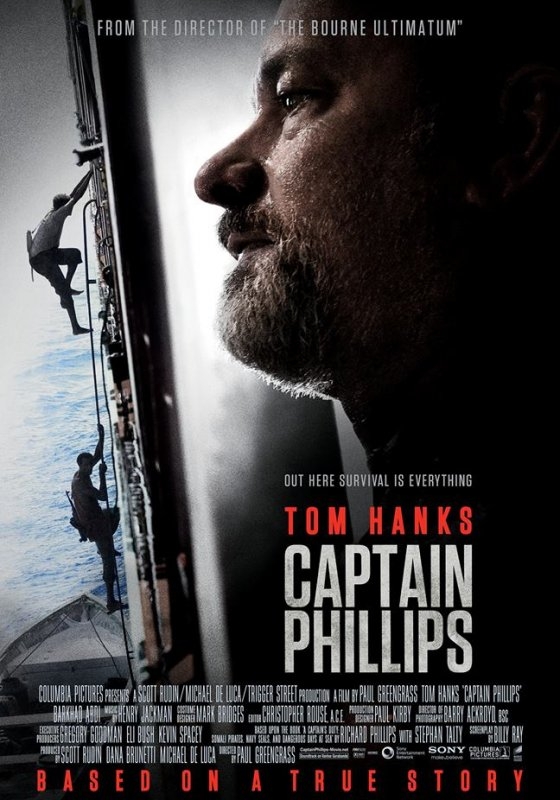 As with Steven’s other reviews, this was first published on the brilliant Popcornaddiction.com. Check it out or face the consequences.

Richard Phillips (Tom Hanks) bids his wife Andrea (Catherine Keener) farewell as he prepares for another shift at work. Phillips is captain of the MV Maersk Alabama, a cargo ship that is bound for Mombasa in Kenya. While rounding the Horn of Africa, however, the ship is attacked by Somali pirates. Despite Phillips’ attempts to counter their advances — an improvised plan involving flares and high-pressure hoses — four pirates eventually manage to board the Alabama, storming the bridge and taking control of the ship. As the captain tries to keep his crew safe, the US Navy dispatches USS Bainbridge and USS Halyburton on a rescue mission.

Despite being advertised as from the director of The Bourne Ultimatum, Captain Phillips has much more in common with United 93. It’s based on a true story for starters, but it’s also quite a faithful and measured adaptation of real events. There’s a scene relatively late on in which Tom Hanks grasps for a pen, and whereas Jason would have once used it to neutralise a roomful of brainwashed super-soldiers Richard simply uses it to scribble a short note to his wife. There are of course similarities, however, and Captain Phillips employs Paul Greengrass’ trademark close-ups and shaky-cam to gripping effect. The film is tense beyond belief.

Suspense builds throughout the first act, as safety-conscious Richard puts his crew through a timely drill — as a fortuitous Phillips did in real life — just prior to the actual attack itself. From the moment the pirates’ ladder connects with the hull your stomach lurches, your muscles tense and you find yourself balancing ever more precariously on the edge of your seat. Barkhad Abdi is absolutely terrifying as Muse, the Somali’s self-appointed leader; he hijacks the film with as much force as he takes over the Alabama, and if you don’t know how the story turns out then you really do begin to believe that anything could happen.

There’s never any denying that this is Hanks’ movie, however; a grey beard and a slight accent help to distinguish the character visually from the actor’s other creations, but Hanks has done his research and knows Phillips through and through. Admittedly, he’s playing something of a long game, and it’s not until the final act that you realise just how much he has made you care for the character. Hanks’ final scenes are some of the most powerful that you will see this year, and together with his work on Cloud Atlas vindicate an actor who has perhaps become better known for lesser roles such as Robert Langdon in The Da Vinci Code and Angels & Demons.

As with his treatment of United 93, Greengrass is uncompromising in his portrayal of a hijacking. To call it a pirate movie is to evoke images of peg legs and the eye patches, but this is something else entirely. It may not be perfect — the hiding crewmates and their guerrilla resistance perhaps aren’t used to their full potential — but it’s still an incredibly taut, tense and genuinely traumatic experience. Smooth sailing in the Caribbean this isn’t.