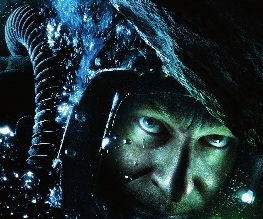 The film opens with expedition bankroller Carl (Ioan ‘Fantastic Four’ Gruffudd), his girlfriend Victoria (Alice Parkinson) and teenager Josh (Rhys Wakefield) rappelling and parachuting down the massive pit of a cave in Papua New Guinea. Arriving at base camp – handily set up by experienced cave explorer Frank (Josh’s father, played by Richard Roxburgh) and his expedition partner, George (Daniel Wyllie) the team ready themselves for an underwater adventure. The problem? Silly teen Josh hasn’t brought the emergency oxygen tanks with him. Will that potentially fatal mistake stop them going under? Of course it won’t.

When the inevitable storms hit, the inevitable people die horribly and the resident Expert has been proven thoroughly right, the group quickly decide they have to try find an alternate route out of the cavern before it’s too late. We follow them as they battle whirlpools, narrow passageways, rising flood lines and lack of oxygen, all the while wondering if the ill-fated team will ever make it out alive (as well as why they just didn’t all go to Marbella instead.)

Filmed using the same 3D technology as Avatar, the additional dimension doesn’t make up for the flatness of the plot. Sanctum could easily have been stupid-and-satisfying disaster fodder similar to 2012 or Armageddon, but it tries so hard to be an intelligent, poignant film that it makes its downfall all that worse. The plot feels recycled, with a tenuous operation falling apart in a way that is achingly predictable yet no one was prepared for, and the characters go through the motions of escape in the same way we have seen a thousand times before. To be fair to the actors, they’re doing the best they can with the material they’ve got. The majority of characters feel like they were taken from a stock library and chucked onscreen with little forethought, with any tensions feeling forced and cliché. Lead Rhys Wakefield is a particular annoyance as forgetful teen Josh, playing one of the whiniest characters I think I have ever seen in a film. Seriously, in the first half hour of the film, before anything major has happened, he pouts and weeps so much that you’d swear he was watching the beginning of Up on loop to Candle In The Wind. Father Frank is very much like Lost’s John Locke, constantly preaching about how the cave doesn’t care about schedules or some nonsense, but he does nothing that warrants his own son being continuously hostile to him, especially when he is the only person who could get them out.

The only things that save Sanctum are its decent set pieces, in particular the now infamous ‘meat grinder’ sequence, which is not for the weak stomached. There are some moments of heart-pummelling tight squeeze, though considering the claustrophobic potential of the setting Sanctum never really makes you feel like the walls are closing in. Sadly, in its efforts to be A Serious Film, it loses its fun fodder potential. Some good effects and a hard-working cast aside, you can’t help but wish the water in the cave rose faster so we’d all just be put out of our misery.

A decent forty plus minute three part featurette, mainly looking at the real life event behind the film and the practical effects involved in the making of the piece. Quite repetitive and slightly on the fluffy side, it’s an intriguing watch nonetheless. There are also nine minutes of deleted scenes, which are better off out of the film. Standard.