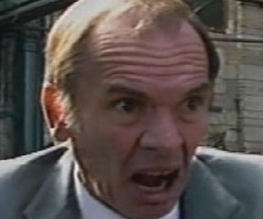 I’ll come clean – I’m in a bit of a pickle with this one. A dilemma, a tight spot, a quandary if you will. Sudden Fury – out in 1997 but inexplicably, wonderfully being given a re-release – is the sort of ill-conceived, woefully executed catastrophe that inspires awe: a cartoonishly violent gangster yarn set on the mean streets of suburban Hampshire, the film’s budget appears to have been spent entirely on squibs, rendering the term ‘production values’ otherwise completely redundant as there simply aren’t any.

One often cannot make out what is happening; this is because scenes appear to have been lit with a desk lamp, by a blind person. Risible, sub-sub-Tarantino dialogue is mumbled distractedly by a motley collection of stoned film students and a bunch of those salesmen types that knock on your door at six in the evening and try to talk you into switching energy providers. The camera lingers lovingly on bare ceilings long after the actors have left the room. Just… it’s just a glorious mess.

Which brings me to the quandary I mentioned, because I guess what I’m trying to say is you have got to check this film out. And the squibs are a large part of that, so who wins? Writer-director Darren Ward, that’s who, for it was he who said: “I shall make an action film set in and around Ringwood, Hants. It shall feature exchanges like “But you haven’t even come yet” “Shut up you slag, I’m the one paying!”. Every penny of our budget will go on squibs, and sausages for entrails, and red stuff that I guess looks like blood, because it is red. And it shall have a crime kingpin in it who looks like David Mitchell, but not quite so butch.”

And you know what? He bloody did it. And it may well be that his efforts have produced a spectacle of no artistic or social merit whatsoever, may in fact have been predicted by Nostradamus himself as some sort of harbinger for the end of the Age of Man, but does that mean you shouldn’t watch it? If you’ve got any sense, no. No it doesn’t.

Previous: From Hollywood to Holyrood – Scotland in film
Next: Oscar nominations! Squee!