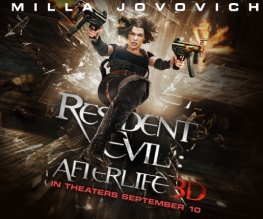 Resident Evil: The Afterlife 3D picks up from where Resident Evil: Extinction left off. The T-virus is still causing genetic mutation resulting in zombies hanging out and making life a bit hard for those who are still without infection, mainly because they want to eat them. However, all is not doomed. A beautiful place called Arcadia has been created for survivors. It is clear of the virus. There is food and water. And hope. No, it’s not in the Elysian Fields. It is a boat. Reunited with Claire Redfield (Ali Larter) and her brother, Chris (Wentworth Miller), Alice (Milla Jovovich) must take down the Umbrella Corporation, make sure she doesn’t get slobbered on by zombies AND get to Arcadia. Busy lady.

We begin with a dramatic sequence. It’s raining. There is a girl standing in the rain. People walk past her. A man makes eye contact with the girl. There is a pause. Then BAM! She pounces in true zombie style, biting into his neck. Blood.

It could almost be the computer game. Mais non, sacre bleu, I hear you exclaim. Well, yes.

We are then transported to the underground fortress that is the “Umbrella Corporation”, somewhere in Tokyo. Funny how everything high-tech leads to Japan. Everything seems to be running smoothly until, what’s that? Oh it’s the sound of a plot point. Really, there’s an intruder? Picked up by your super sweet, technology system? Well, then hop to it security!

Alice has returned to meet her nemesis, Albert Wesker (Shawn Roberts), a cross between Lena from Super Mario Bros and Agent Smith resulting in a character not disimilar to the spoof agents in Spaced. Neck-clicking all round.

The mission is to bring down the company and stay alive. With the undead banging on the door like the overly zealous neighbour who won’t get the hint, time is of the essence. Whilst the suspense never left me poised on the edge of my seat, there were occasional points that made me jump. What can I say; zombies make me twitch. But then so does sleep. Perhaps I was so bored, I fell into an unconscious state and was just involuntarily jerking, like a dog dreaming he’s chasing a rabbit.

It’s not that I don’t love a good action film. I just felt that Resident Evil: The Afterlife, was just like watching a computer game. Except I wasn’t as involved. Alice and Claire may as well have been called “fighting woman 1 and 2” as they were as two dimensional as the game characters. Ironic as it was in 3D.
I didn’t feel an attachment to any of the characters and let’s face it, didn’t feel any great sense of loss if they died. The 3D effects were a bit overrated; to be honest, the 3D trailers caused more of a reaction. If you’re a fan of the computer game to the extent that you watch the demonstrations as entertainment, then by all means go and watch this film. If you’re after a wee bit more, then play the game. At least you would care more if the characters lived or died. It would mean you couldn’t get to the next level.