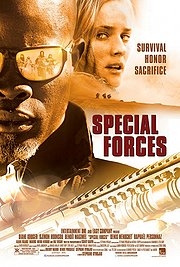 The feature debut from French documentary director Stephane Rybojad, Special Forces hits DVD this week boasting a strong European cast. Alongside more established stars Diane Kruger and Djimon Hounsou, the credits also include Denis Menochet, thus far best known in this part of the world as the tearful dairy farmer who was harbouring Jews at the start of Inglourious Basterds. Elsa Casanova (Kruger) is a world renowned war correspondent working in Afghanistan. While investigating a case of human trafficking, Elsa is kidnapped by young, charismatic, Bin Laden-ish Jihadi Ahmed Zaef (Degan, who’s actually Israeli – Ironarama!). Though he seems somewhat taken with her, Zaef releases a video to the world announcing that he will behead the attractive reporter. Outraged and fearing a hugely embarrassing spectacle should she be executed, the French government call in a Special Forces unit of seven hardcore Frenchmen led by Commander Kovax (Hounsou). After being dropped into the Pakistani tribal area where Elsa is held, the team manage to free her from capture but their planned extraction fails under heavy gunfire from the Taliban. Left with no other choice Kovax draws up what may be a suicide mission – a gruelling trek through mountains that shade the Afghan/ Pakistan border. The team begin their daring escape, bringing Casanova with them, but Zaef and his minions are close behind. For the best part of an hour or so Special Forces rattles out exactly as you would expect. Lots of expositional dialogue, baddies being unspeakably bad, heroes being gruff and macho and heroines being tough and resilient. The stale, homogenous nature of the narrative is not assisted by the action sequences which are stifled by plain, unremarkable direction. While they contain all the relevant and expected criteria (soldiers shout “Allez! Allez!”/ guns go bang/ terrorists go flying) there is a strange lack of force behind their execution and gunfight after gunfight flicks by with nothing but dullness to remark upon.

Then, somewhere near the final act, things begin to get more interesting. As Kovak and the gang are cast out in the Pakistani wilderness the film locates not just its nerve but its heart, brain and balls too. Struggling through the unforgiving heat of the desert, the rugged, frozen impossibility of the mountains and the never ending danger of the lowlands, littered as they are with hostile forces, the muscle men of the film’s earlier passages become real people, new dimensions revealed as they struggle not just against the elements and the enemy but against their own resolve. Rybojad too comes into his own in this landscape and the unexceptional action scenes we saw earlier are replaced by breathless, overpowering photography utilising the scenery of Tajikistan, where much of the film was shot, to gripping effect. Special Forces builds to a genuinely emotional climax as the team are whittled down by enemy bullets and the cruelty of nature, and the quality of the cast list, particularly Kruger and Menochet as Kovax’s best buddy Lucas, finally begins to show on screen. As welcome as this final third is, however, it chiefly serves to leave you even more disappointed by the plain-Jane, bang-bang vacuum that preceded it.

Previous: Orange(Wednesday)s And Lemons #58
Next: Beauty 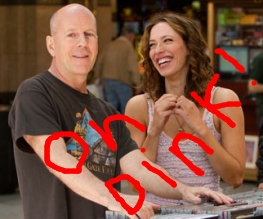 Rebecca Hall and Bruce Willis in trailer for Lay the Favorite