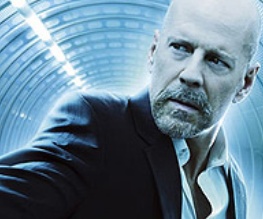 Surrogates shows us a bleak vision of the future (seriously, is there any other type of future according to films?) in which people have the power to create flawless robot versions of themselves. Why, you may ask? Well that’s not really the point, is it? Cos it’s cool. This film explores – with predictable pessimism – a future in which our lives are controlled by machines. And though it’s a little dull in terms of overall message, this is still good, Bruce-Willis-based fun, ensuring you 88 minutes of non-stop action.

Two FBI agents (Bruce Willis and Radha Mitchell) investigate the mysterious murder of a college student linked to the man invented the concept of ‘surrogates’. The draw of these robotic twins is that they enable people to experience life vicariously from the comfort and safety of their own homes. The murder spawns a quest for answers: in a world of masks, who’s real and who can you trust?

Willis still takes a beating better than anyone in the business, and there are enough action sequences to keep any explosion junkie satisfied. The futuristic world built around the characters is visually interesting (albeit bloody depressing) and the whole who-dunnit mystery is engaging enough, although let’s be honest, the plot isn’t really why we’re watching. Go Bruce! Kill them! Get them all! Boom! Bang! Yeah!

Overall, Surrogates is a non-fluffy man’s bit of fluff – good effects, an interesting premise but a plot that is slightly lazy. From about fifteen minutes in you have an idea of what’s going to happen to Bruce and crew, and you know what, it turns out you’re right. But it doesn’t really matter compared with the joy of seeing Brucey back on form, along with the bizarre hilarity of seeing his blonde and quaffed surrogate doing his dishes with a grin on his face. God, we really are easy to please, aren’t we?

Commentary with director Jonathan Mostow
A More Perfect You: The Science of Surrogates
Breaking the Frame: A Graphic Novel Comes to Life
·Four Deleted Scenes

Previous: The Firm
Next: Madonna Gives Directing Another Try