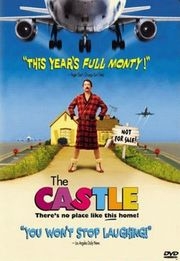 In 1998 this low-budget Australian movie was the hit of the Sundance Film Festival, attracting glowing reviews from big-name critics like Roger Ebert, and going on to smash the box office in Australia and New Zealand. However, though it was acquired by Miramax, it flopped on this side of the world, left to flounder on VHS while Miramax were pumping their cash into Shakespeare In Love.

Darryl Kerrigan’s (Caton) home is his castle. Ok, so it’s in the middle of an unfinished housing development, adjacent to Melbourne International Airport and still being added to and extended by Kerrigan himself, but that doesn’t matter. He lives there in relative bliss with his wife Sal (Tenney), sons Dale (Curry) and Steve (Simcoe) and his four greyhounds. There is a third son, Wayne, serving an eight-year sentence for armed robbery, and also a daughter, Tracy (Lee), who is a blissful newly-wed with her Greek-Australian kickboxing husband Con (Eric Bloody Bana in his first ever film – he looks so YOUNG!). Suffice to say, Kerrigan is probably the happiest homeowner in Australia; until, that is, he and his neighbours are served eviction notices by the neighbouring airport which is looking to build on their home. What follows is your typical David vs. Goliath story as Darryl tries to fight the decision and save his castle from the bulldozers.

It’s easy to see why this film was regarded so warmly at Sundance, as it plays perfectly to the kind of humour elicited by Napoleon Dynamite, or if we’re staying Antipodean, Flight Of The Concords. The comedy is about as dry as it gets, whether when Con and Tracy talk about their honeymoon, or when Steve rifles through the trading post to see if there are any good bargains.

I’m sure there are some things in there you’d laugh harder at if you were from that side of the world, just like there are things from Gavin & Stacey that might only chime with you if you were Welsh, but the regionality of the film isn’t to its disservice – rather, it expertly helps to cast the Kerrigans in their own little bubble, sealed away from the rest of Australia. Even the film’s grainy aesthetic gives you the impression that it’s a lot older than it is, and one can only assume this was a directorial decision as well as one informed by the budget. Kerrigan’s unrelenting optimism and everyman sensibility is so bloody likeable that you just want pull open a tinny and kick back with him at his lake house – by lake house, I mean kit house that he’s built on a swampy marsh in the glamorously named Bonnydoon. When the court case looks to be going against him – and for a while it does – you genuinely feel for him and his family, which makes for some truly touching, if slightly over telegraphed moments. But of course, eventually, the court case doesn’t go against him, and the plot unfolds with satisfying predictability. It doesn’t matter though, because it’s the warmth and tenderness with which this story is told that makes this film so memorable. If you like Napoleon Dynamite, Eagle Vs. Shark, Rushmore and other films of that ilk, then you’ll just love The Castle.

Previous: The Devil’s Double
Next: Orange(Wednesday)s And Lemons #30